Tether’s effect on the crypto market at large cannot be understated. Not only does the fiat-backed stablecoin act as a safe haven asset during downtrends and crashes, in the past sentiment surrounding Tether has had an enormous impact on Bitcoin price. In the past, Tether turmoil has led to massive increases in Bitcoin price and the value of other crypto assets, as capital held in Tether outflows back into other cryptocurrencies.

The overall market cap of Tether also appears to act as a magnet for Bitcoin price, with the price of the digital asset increasing sharply whenever new Tether is injected into the crypto market. With yet another half-a-billion dollars worth of Tether market cap added to the crypto market since mid-May, another Bitcoin price surge may also be ahead.

There’s no denying Tether’s influence over the entire crypto space. Not only is it the leading stablecoin, and the only stablecoin in the top ten cryptocurrencies by market cap, it’s also become the crypto trader’s first choice to hedge against falling cryptocurrency prices.

Traders will exchange Bitcoin and other cryptocurrencies like Ethereum, Ripple, or Litecoin for Tether when they expect prices to fall. Due to Tether’s value being tied 1:1 to the U.S. dollar, its value stays relatively stable, preventing extensive losses from holding the volatile assets.

It also has shown some correlation to Bitcoin in a highly unusual way. Each time the Tether treasury mints new Tether, Bitcoin’s price climbs.

The correlation began, as crypto analyst FilbFilb, points out, prior to the massive plunge through $6,000 that brought Bitcoin to its bear market low. Just ahead of that bear market low, Tether’s market cap also hit the lowest point since February 2018.

The last time the crypto analyst pointed out fresh Tether printing, was back in late April when the Tether treasury minted another $300 million of the stablecoin. This appeared to be the trigger that took Bitcoin price back above $6,000 and climbed higher towards $9,000 where it’s consolidating below.

Since mid-May when Bitcoin first broke above $8,000, another $500 million in Tether have been added to the market, with $150 million of it printed just today. 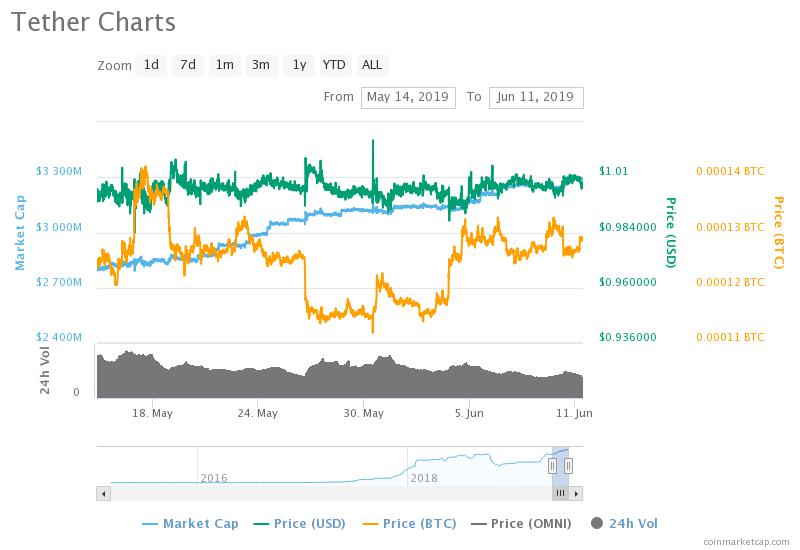 The “fresh” printed Tether, could potentially be the catalyst to take Bitcoin above $10,000 – the area that’s expected to be a massive FOMO trigger.

It’s not known why new Tether has this effect on Bitcoin price, however, the stablecoin was at the center of a market manipulation investigation by the Department of Justice, so anything is possible. Much controversy surrounds the stablecoin and its parent company – which also is the parent company of crypto exchange Bitfinex – was recently accused by the New York Attorney General’s office of covering up a loss of $850 million at the hands of a capital management company, by using funds reserved for Tether backing.

The post $150 Million in Freshly Printed Tether To Cause Bitcoin Price to Surge appeared first on NewsBTC.

Analysts are Still on Edge About Potential Bitcoin Collapse Despite Momentu... Bitcoin (BTC) Price Approaching Next Break: Bullish or Bearish?
Scroll to top