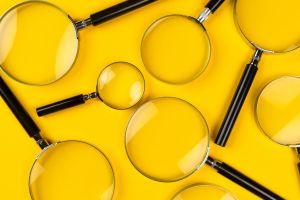 Crypto market researcher Glassnode claims it has found “a clear indication of a healthy and consistent adoption of Bitcoin over the past 10 years.”

According to them, the daily net growth of on-chain entities holding bitcoin (BTC) is consistently positive: “In Bitcoin’s history there have been only 21 days so far in which the net entity growth was negative.” Meanwhile, the volatility in bitcoin address growth is significantly higher than that of entities.

As of January 2020, after 10 years of a “healthy and consistent adoption,” the number of on–chain entities holding bitcoin is about 23.1 million, Rafael Schultze-Kraft, co-founder of Glassnode, said in a blog post. It is 18.5% less than the current number of addresses with a non-zero BTC balance (c. 28.4 million). 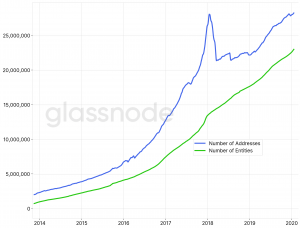 Glassnode refers to their numbers as “entities” not “users” even in the cases where one address is used by several users and that one address is controlled by a single entity nonetheless, such as an exchange. They further say they utilized a combination of advanced data science methods and clustering algorithms on top of raw on–chain data to come to their results.

Additionally, according to the report, the seven richest entities are exchanges – controlling over BTC 2.35 million, or c. 13% of the circulating Bitcoin supply.

Balance distribution of entities in the Bitcoin network (January 2020) 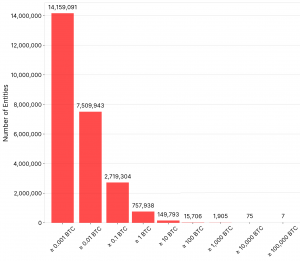 Meanwhile, the response to the report was generally positive, as this is an interesting topic many are tackling hoping for a correct answer. Some people, however, asked for more information on the methodology underlying the report, doubting if it’s indeed possible to ever know the exact number of entities.

Others were not quite sure how to interpret the data, finding the numbers suspicious.

That’s why this is an upper bound – there are at most that many entities.

But even if some tiny addresses are not clustered together, there are entities who only hold funds on exchanges (which are not counted using this methodology), cancelling those missing clusters out.

Here are a few more comments:

I wonder how much better the numbers would look if we included exchange accounts. Last I checked Coinbase alone (allegedly) has over 30 million registered users. Too bad we’re losing some of the transparency offered by the blockchain..

That’s a really interesting article.
It’s at odds with data showing a big decrease in the number of BTC retail investors and a reduction in vendors accepting BTC.

Why Analyst Who Predicted Bitcoin’s Surge to $9,000s is Now Really Bullis... Bitcoin Hits $9.4K but a Bullish Breakout is Still Not Confirmed
Scroll to top