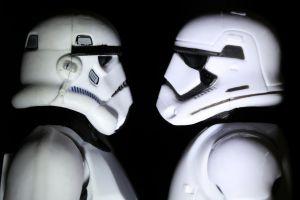 It’s no secret that rival blockchain networks, or to be more precise, the people behind the projects, don’t like each other. The Bitcoin community rags on Ethereum, while the EOS community rags on Tron, and so on, in a seemingly endless chain of barbs, criticisms and mockery.

But does the war of words between cryptos ever spill over into something more aggressive and destructive? Possibly, if previous attacks on the likes of Verge and IOTA were the responsibility of rival developers, rather than random hackers.

And according to some commentators within the wider crypto community, the future could bear witness to a rise in rival chains attacking each other in one way or another. In an already fractious climate, this is likely to only make relations between cryptos even colder, and could even damage the future viability of some projects.

However, developers working with specific blockchains believe that such a scenario is unlikely. Yes, hackers who think they can make some money by attacking a network might attempt to do so, but rivalry alone isn’t enough to motivate developers into doing the same.

First, is there any evidence that one network has somehow attacked a rival? Well, back in July 2018, an Ethereum developer accused members of the EOS community of a Sybil attack, which in this case saw the Ethereum blockchain being spammed with airdrops of tokens with no value, thereby inflating the price of the gas needed to process transactions.

Obviously, no one associated with EOS accepted this charge, but the fact that around USD 2 million was spent to send the worthless tokens indicates that whoever was behind the attack had deeper pockets than the average user.

Other evidence of rival attacks is scarce, although numerous breaches of various networks have taken place over recent months and years. There was a series of attacks against Verge in 2018, the theft of IOTA tokens (also 2018), as well as an “intentional attack” Ethereum suffered this past New Year’s Eve.

Nothing suggests that such attacks were the work of anyone other than one or two perpetrators. However, given that you’d probably have to already have experience with blockchain to pull off such crimes, you could potentially stretch the meaning of ‘rival attack’ to incorporate them, since they were likely committed by people ‘aligned’ with another project.

As for the future, some figures within the industry believe that rival cryptocurrencies will increasingly attack each other’s chains in the coming years.

In fact, around the same time that Ethereum was undergoing its latest attack, the co-founder of Delphi Digital, Tom Shaughnessy, was predicting just such a rise.

$ETH vs $DOT will be the biggest fight if I had to guess. Felt this way for a long time

He isn’t the only one. Ethereum co-founder Gavin Wood wrote a recent article predicting the arrival of “blockchain wars,” as competing networks increasingly strive to exploit bugs and weaknesses in the architecture of rival chains.

“Over time, governance-backed, economically-incentivized positive action will turn into outwardly-directed negative action against competitors,” he wrote. “Initially, it will be the dumb networks that are eliminated. Blockchain ‘wars’ will follow.”

Despite these warnings, a variety of developers believe that fears of a rise in rival attacks are mostly unfounded.

Ethereum developer Nina Breznik agrees with Dorier’s view that rivals won’t be motivated by rivalry alone to attack another cryptocurrency. Asked by Cryptonews.com as to whether we’re likely to witness an increase this year, she replies, “Verbal attacks – yes, a lot. Otherwise, I don’t know.”

Breznik adds that we’ve been given a distorted view of how much rival chains ‘hate’ each other, because of how they need to spend so much time promoting themselves over their competitors.

“Verbal attacks are common, it’s marketing rhetoric and everyone wants to pull people into their story/community,” she explains.

“But I don’t know about attacks on the infrastructure. I was working on an in-browser tool for writing and searching solidity source code and all the apps we’ve built are server-less, so we made sure there is nothing to attack.”

Another Bitcoin Core developer, Bryan Bishop, chides Cryptonews.com for asking whether rival chains will increasingly attack each other. “I think those are the wrong questions,” he replies.

That said, he does warn that projects and their development communities need to be careful when it comes to bugs in code, which could invite attacks if they’re made known to the wrong people.

“The biggest concern is the management of sensitive information regarding vulnerabilities,” he says.

“The disclosure of these vulnerabilities is very important, but not at the expense of compromising existing users. It’s often the case that security holes need to be fixed quietly and are only announced later.”

In other words, we may continue to see the odd network attacked as a result of its own vulnerabilities. But as for whether 2020 will be characterized by ‘blockchain wars,’ you probably shouldn’t hold your breath.

Check out These Dozens of Crypto Christmas and New Year Gift Ideas
Personal Data Leaks In Crypto Are Inevitable, Here’s What Can Be Done
Why This Bitcoin-Believing Startup Bets on Facebook's Diem Instead
Bitcoiners Ask: ‘WTF Happened In 1971?’ The Answer Might Shape The 2020s
Microstrategy Is Not For Microsoft and 20 Crypto Jokes
BTC Downturn, ETH Scaling, Coinbase Listing and 20 Crypto Jokes
How Well Has Bitcoin Performed as a PR Project?
Rallies, Corrections, ATH Conundrums and 20 Crypto Jokes
0 replies