Superior, Bitcoin is generally in an uptrend despite early July losses. Presently, resistance lies at $14,000, and if buyers overcome this level, then BTC could soar to $18,000 by close of the year.

The altcoin world is turbulent. Even if the general notion is that Bitcoin and altcoin prices are in sync, correlating directly with the former acting as a base in most exchanges, thus far, there is a divergence in performance.

Contributing to this difference is the liquidity of Bitcoin, the trust it has thanks in part to the controversy around its use, and the high reliability. However, what sets them apart is what investors want to draw from each asset. Driven by varying objectives, Bitcoin remains to be that store of value, a reliable, low throughput network whose security is like no other.

On the other hand, investors and even traders relishing for action and ten-fold gains within short time frames flock in droves to altcoins. At the moment, the expectation is that altcoins like Bitcoin Cash or Bitcoin SV will rise from the ashes.

With the negative publicity of the latter, these Bitcoin hard forks have low market capitalization with Bitcoin SV in particular in danger of being illiquid following the delisting from Binance. While at it, there is a race in Iran. Feeling the squeeze from US sanctions, citizens are all in, mining Bitcoin even in Mosques despite authorities crack the whip on cryptocurrencies. 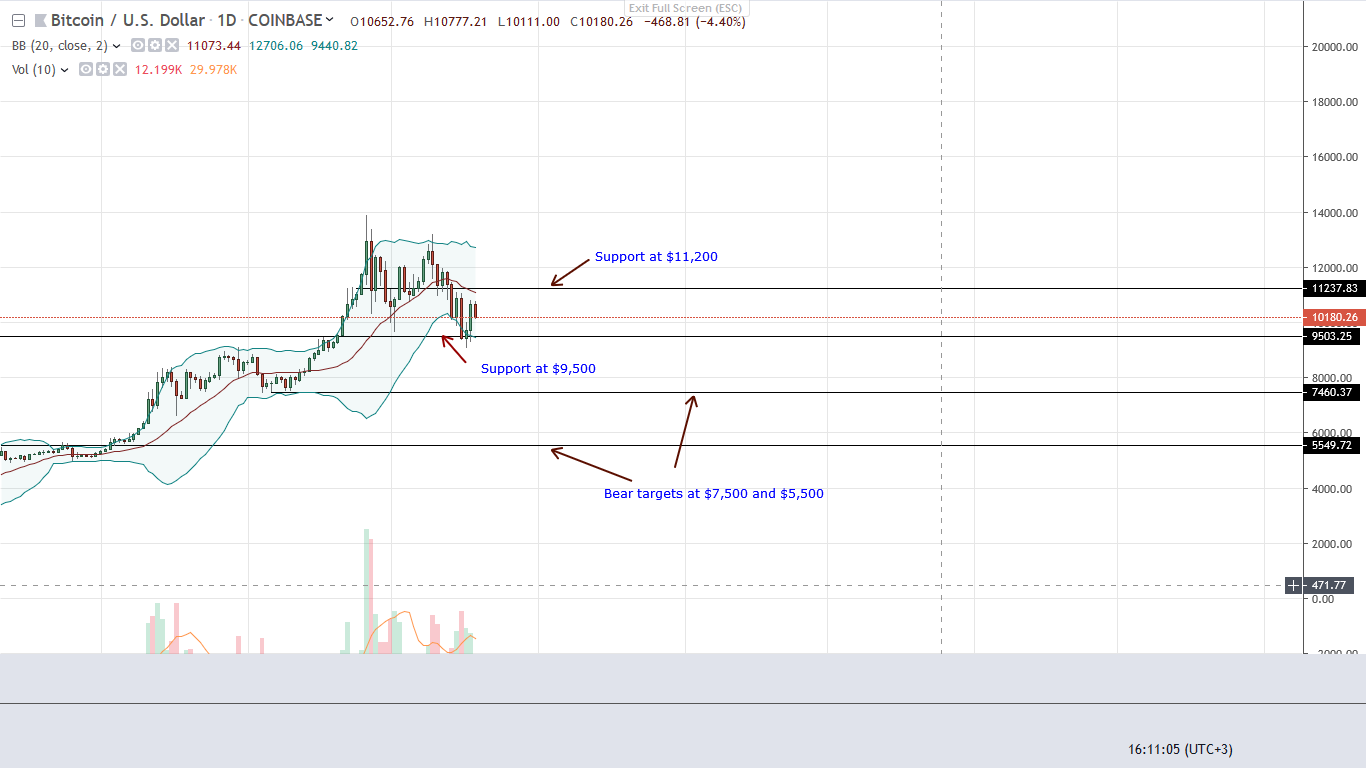 At the time of press, BTC buyers are back. Following yesterday’s recovery and thrust past $10,000, prices are back in consolidation. Typically, these sort of wild price movements is common.

Even so, distinct from signaling candlesticks, yesterday’s bar was with low participation. Then again, notice that there is a whole bull candlestick closing below the lower Bollinger Band (BB). That’s a bullish signal, revealing a state of BTC under-valuation, justifying yesterday’s expansion.

Unless otherwise there is a surge past June 2019 high of $14,000 in line with previous BTC/USD trade plan, the path of least resistance is southwards. Because of that, every high is technically a selling opportunity with targets at $9,500 and later $7,500.

Anchoring and leading this trade plan is July 16 candlestick. The bar has decent trading volumes of 43k confirming the bear breakout of July 14. Therefore, as above, any surge above $11,200 or June 27 low-previous support now resistance, ought to be with high participation exceeding 43k. If that prints this weekend, BTC could rise to $14,000. Conversely, liquidation will cement this trade plan’s overview.