Overly, there is a changing view of what Bitcoin is. The entry of Facebook could open doors for Wall Street corporations. Because of this possibility, Steven Eliscu of DMG Blockchain now says blockchain systems will eventually “supplant legacy bank-based systems.” Meanwhile, BTC prices are trading above $10,500 and 27 percent higher from last week’s close.

Trading above $11,000, BTC rally is parabolic. It is a continuation of a streak that began in February 2019. More than doubling in the space of four months, investors’ fortunes are changing. Spiking prices are a reminder of the late 2017 Bull Run. Then the space’s market cap more than double.

However, unlike then, players are different thanks to improving awareness and the entry of heavyweights like Facebook tagging legitimacy. Talking about their entry, Steven Eliscu from DMG Blockchain said:

“The Facebook-created blockchain is a reinforcement of the long-held idea in the Bitcoin community that a financial services system built on the blockchain will supplant legacy bank-based systems.”

“In the immediate future, Libra provides a huge overall boost to the sector that we believe will catalyze institutional and government acceptance such that – at least the top – public cryptocurrencies are here to stay and will remain an ever important asset class that hundreds of millions of people will hold.”

Generally, Bitcoin is more mature. Notably, regulators are more tolerant of Bitcoin and its underpinning technology. 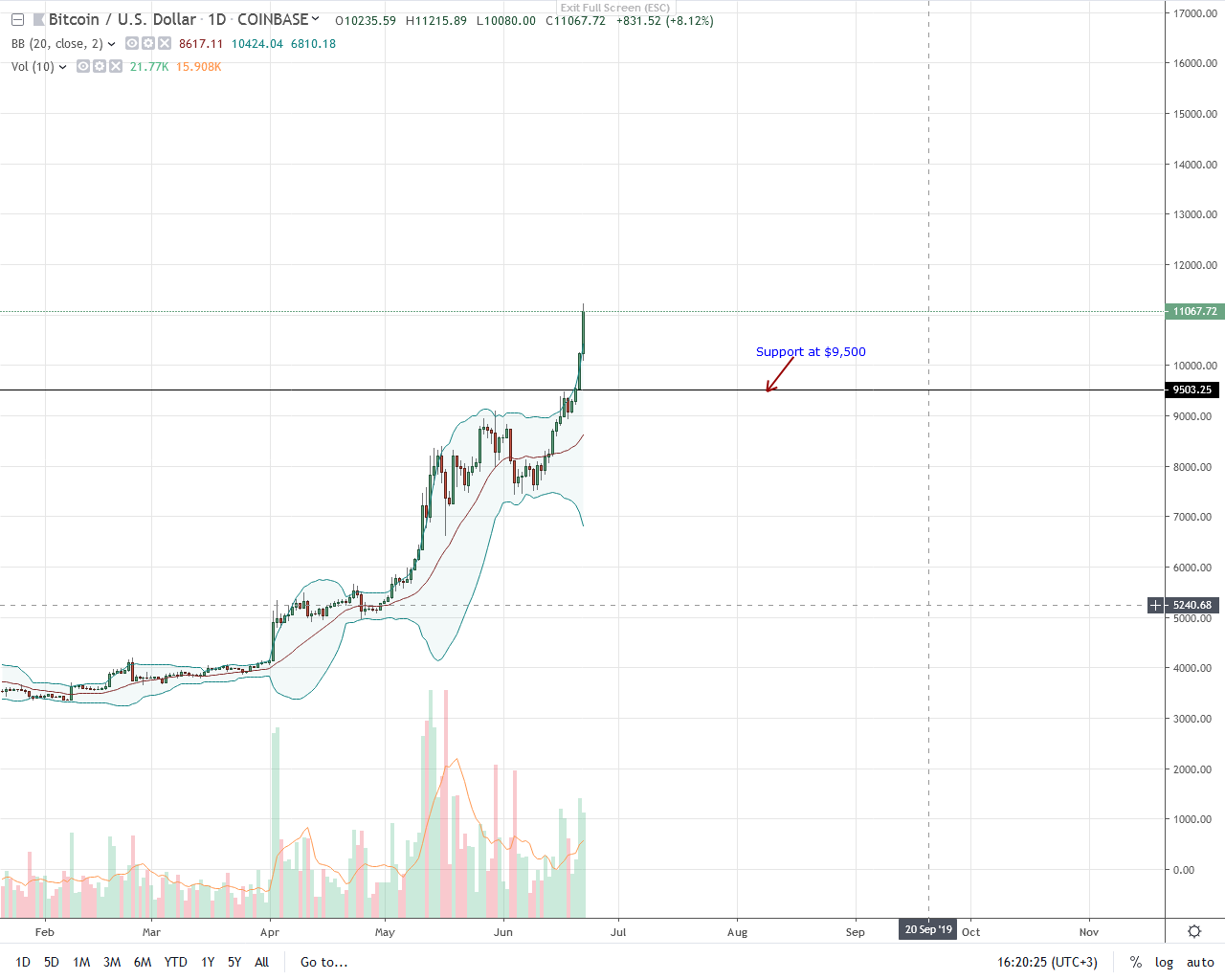 Expanding, as the interest around cryptocurrencies increase, BTC bulls are better placed to drive the coin’s price to new 2019 highs.

In response to this encouraging development confirming buyers of April and May, every correction is a buying opportunity. Ideal targets, in light of this surge, will be $12,000 and later $15,000.

Endorsing this view are BTC bull candlesticks banding along the upper Bollinger Band, hinting of underlying momentum as the third phase of a typical breakout pattern takes its course.

Even as prices and participation levels diverge, the FOMO moment expected following the breach of $10,000 could draw volumes. In that case, every dip is a buying opportunity. All the same, it would be ideal if the confirmation of this break is at the back of high trading volumes exceeding 31k of May 30th or better still, 47k of May 14th.

The post Bitcoin Bulls Relentless, BTC Soar Past $11,000 In A Reminder of Q4 2017 appeared first on NewsBTC.