As the price massacre continues from the weekend, altcoin holders face further anguish by way of rising Bitcoin dominance. As things stand, Bitcoin dominance is at 66%, a level not seen since April 2017.

Several analysts see this trend continuing, with predictions of dominance rising to the 70%-80% mark. The implications of which would put paid to a much-needed altseason. Nonetheless, despite the slide in prices, Bitcoin maximalists can find a crumb of comfort in this. 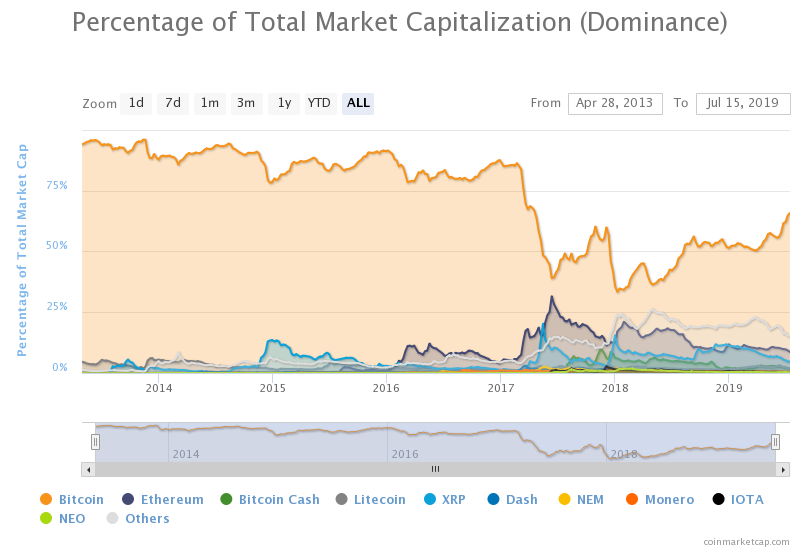 Bitcoin is currently priced at around $10,300, but has been on a downward course for the past week or so. This follows the failure to breach strong resistance at $13,800, during the parabolic run-up late last month.

While this still represents a 170% increase since the start of the year, the hopes of an overspill into the alts remain somewhat subdued. Indeed, with Bitcoin dominance on an upward trend since January 2018, when it was at 35%, the cries for an altseason become ever more despondent.

So many people promised me altseason soon, while there hasn’t been any sign yet.
Time to clean the following list
Shorting unexperienced hype farmers$BTC $ETH

On that note, Lunar Express sees a continuation of this in the short term, at least. He said:

“I still expect some minor rise in BTC’s dominance during the next few days. I’m targeting the zone between 69.89% and 73.23% to see a top out. I prefer 69.89% though but we all know that Mr. Market has it’s own will so we have to wait and see where it strands eventually. Although, there are quite some signals that 69.89% could be the top.”

However, he drew attention to the fact that we are currently in the golden pocket zone. Which, last time around, in December 2017, saw a drop in Bitcoin dominance, and the subsequent beginning of altseason:

“Another notable thing is that we are inside the golden pocket zone. Meaning that we’ve retraced 61.8%-65.8% of previous alt season. Which is usual a good spot to expect a turn.”

And while Lunar Express concluded that altseason is imminent, others paint a more pessimistic view. For example, Chris Burniske, partner at Placeholder VC, subscribes to the belief that Bitcoin must first reach its all-time-high. And given the market slump of late, this will not happen any time soon.

In a comprehensive Twitter post, Buriske described the cyclical relationship between Bitcoin and the alts. He talked about altseason being driven by whales looking to invest their Bitcoin gains, but only when Bitcoin gains have been maximized:

“Here’s the cycle: $BTC rallies hard, majority of “alts” drop as BTC is the main liquidity provider to #crypto (right now) and no one wants to sell BTC. Value of “alts” in *BTC terms* then drops until whales choose to cycle into “alts.” Then…”

Here's the cycle: $BTC rallies hard, majority of "alts" drop as BTC is the main liquidity provider to #crypto (right now) and no one wants to sell BTC.

Value of "alts" in *BTC terms* then drops until whales choose to cycle into "alts." Then… https://t.co/lX9VZz5ecC

This is a view shared by others, who correlate the timing of the last altseason to Bitcoin’s all-time-high. Twitter user, @BitBitCrypto said:

“Ok, here it comes – your holly grail. In 2017 Altcoins had their biggest ever Altseason AFTER bitcoin was making all time highs. If you’re looking for a big Altseason aim there!”

In 2017 Altcoins had their biggest ever Altseason AFTER bitcoin was making all time highs.

If you're looking for a big Altseason aim there!
(Check eth or others for reference) pic.twitter.com/eivHLjyxAk

And so, given the expectation of rising Bitcoin dominance, in conjunction with the recent price slump across the markets, there is every possibility that altseason won’t be happening soon.

The post Bitcoin Dominance Continues To Rise, Dashing Hopes Of An Altseason appeared first on NewsBTC.