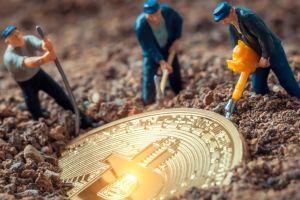 If everything goes as estimated, miners are about to experience the rise in Bitcoin (BTC) mining difficulty not seen since September last year, as more mining machines are back to work, increasing security of the network.

The next Bitcoin mining difficulty adjustment is expected to happen in around four days, when this measure that shows how hard it is to compete for mining rewards is estimated to rise 9.95%, according to major Bitcoin mining pool BTC.com (15:50 UTC).

The last time the difficulty jumped remotely that high was 10.38% seen on September 13, 2019. That was a period of several larger jumps. Following that, however, as the third Bitcoin halving was approaching the rises were smaller and the drops were larger.

This includes the second-largest drop of nearly 16% seen on March 26 this year. Though followed by three increases, the last two difficulty adjustment brought drops of 6% and 9.29%, respectively. What’s more, the latter one was the 8th largest drop in the coin’s history.

Following that nearly 10% drop, this nearly 10% rise will pretty much bring the difficulty level to where it was two adjustments ago in the second half of May – actually just below its 15.14 T to 15.1 T. It’s still higher than last adjustment’s 13.73 T.

Meanwhile, hashrate, or the computational power of the Bitcoin network, is climbing. Compared to 98.30 EH/s recorded at the last adjustment, it’s up to 115.18 EH/s. 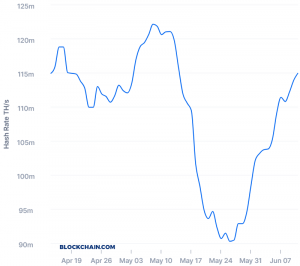 The mining difficulty of Bitcoin is adjusted every two weeks (every 2016 blocks, to be precise) to maintain the normal 10-minute block time. This means that if there are many miners competing among themselves and propagating blocks in less than ten minutes, the difficulty of the next puzzle will be increased; if there are few miners and it takes them much longer to find a solution, the difficulty is decreased – both times just enough to keep block times at around 10 minutes.