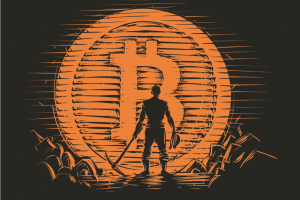 Bitcoin (BTC) just went through its third halving of the mining reward, which is jokingly referred to as ‘Halvation’ (halving + salvation) that should send the price of the most popular cryptocurrency to the moon or even further.

Today, on block 630,000, mined by AntPool, Bitcoin’s rate of new supply was cut in half from BTC 12.5 per mined blockchain block to BTC 6.25, with which the world’s oldest cryptocurrency stepped into a new era that will last for four years until the next halving. And this is happening in the time of the COVID-19 pandemic, economic crisis, and the world’s central banks’ money supply experiments.

Today, the last Bitcoin block with the BTC 12.5 reward was mined by the F2Pool miners. The same mining pool was responsible for block 420,000 when the second Bitcoin halving occurred on July 9 of 2016.

The final Bitcoin block with a subsidy of 12.5 BTC was mined by @f2pool_official and contained the following messag… https://t.co/gRuCcwXNuo

We looked into Bitcoin’s past and discussed the major rises in its network metrics over the last four years, yet what awaits ahead is very much up for debate. Indeed, the debates have been on for months, starting with major questions such as if the halving has already been priced in. These go hand in hand with many halving narratives debated daily.

Ryan Selkis, CEO of crypto researcher Messari argued that this third halving “officially drops” the monetary expansion rate of BTC below the US Federal Reserve System’s 2% inflation target for the first time, which “marks bitcoin’s evolution from beta to production as bona fide digital gold” and the market underestimates this narrative. Still, both Selkis and research analyst Ryan Watkins see the halving as a marketing event made more relevant by BTC’s advancements into the mainstream subconsciousness.

People have been hard at work trying to figure out what’ll happen now. Digital asset management firm CoinShares found the most probable scenario to be that the halving will result in positive supply-side impact over the mid- to longer-term. Christopher Bendiksen, Head of Research at the company, said that the combination of a 50% reduction in available new supply with a reduction in the miners’ sale of their ongoing production to cover costs might drastically reduce the selling pressure caused by miners. This then combined with macroeconomic events and inflows into passive bitcoin investment products “could cause a perfect storm for the bitcoin price over the mid- to long-term.” The company also found that absolutely nothing happening immediately post halving is a likely scenario.

I closed my eyes a moment before the halving and when I opened them again I was on a yacht rich beyond my wildest d… https://t.co/3OX6c25f2c

CoinShares’ Bendiksen, however, is “not convinced that the supply reduction in itself is enough to materially impact the bitcoin price.” Messari research analyst Jack Purdy also disagrees with halving bulls’ predictions made via S2F, while the CEO of Singaporean hedge fund Three Arrows Capital, Su Zhu, warned that these predictions could be wide of the mark and claimed that investors pinning their hopes on mining reward halving and stock-to-flow movements could end up in “over-leveraged positions.”

Furthermore, CryptoCompare, a provider of the crypto market data, argues that S2F and two previous halvings are not enough to conclude that there’s a strong rally coming. The team believes that there’ll be less of the price increase in the year after the halving as the market is very much different from what it was back in 2016, miners don’t have the same impact on the price as back then, BTC options market doesn’t predict a price rise, and there are external impacts as well, such as coronavirus-prompted crisis, as well as BTC now apparently tracking equities closely.

Zooming into this market difference, Meltem Demirors, chief strategy officer at CoinShares, stated that there is a “much bigger market for BTC” today compared to the 2016 halving. Back then, there “was no directionality in the crypto market,” and investors could “only really go fundamentally long” with their BTC investments. “There are [now] bigger firms involved in bitcoin,” Demirors says. “So I think that directionality in a much deeper market for bitcoin is going to change the way people trade around the time of the halving.”

Although previous BTC halvings have all led to a rise in price both before and after the event occurred, this time may play out differently due to the emergence of a whole new derivatives market for bitcoin, one of the largest derivatives exchanges in the world, CME Group, said today.

To think about all those hours spent arguing over the Bitcoin halving, just for the coronavirus to come and blow up every prediction.

Few doubt that this third Bitcoin halving will change the mining industry, and that only the most efficient and economically viable will survive. Qingfei Li, F2Pool’s Head of Customer Service, said that some 40% or more of Bitcoin mining machines will be switched off in the first two weeks after the halving. Alysa Xu, the chief strategy officer at OKEx, wasn’t of the same opinion though, stating that their mining capacity and hashrate will stay “nearly unaffected” even if the BTC price reaches a lower level.

Meanwhile, countries such as the US and Russia will gain a more prominent role in the Bitcoin mining ecosystem, as CEO of a Russia-based mining colocation provider BitRiver, Igor Runets, believes. Nonetheless, Alysa Xu and the head of Binance Pool, Lisa He, both argue that the completed infrastructure, cheaper electricity, available workforce, and government support greatly benefit China, and that its current c. 65% concentration will likely not drastically decrease.

That said, network hashrate should experience “a reasonable decline” post-halving as older ASICs mining rigs (such as Bitmain‘s S9s) are phased out of the Bitcoin network, finds Johnson Xu is the Chief Analyst at TokenInsight, a token data and rating agency. The percentage of mining revenue from fees will at least temporarily double post-halving, while short term average fees are likely to spike post-halving if hashrate sees a decline and network activity maintains its pre-halving status.

The question of security

Some argued that Bitcoin’s halving puts its security at risk, saying that, by reducing the quantity of new BTC given to those who mine it, there will be less financial incentive to maintain the Bitcoin network’s high hashrate, making 51% attacks more feasible in theory.

Others, however, believe that the increasing value of transaction fees will ensure Bitcoin’s security. Even with declining block rewards, Bitcoin’s rising value and adoption would mean that the rewards accruing from transaction fees will incentivize mining, they say. Also, Bitcoin educator Andreas Antonopoulos stressed that ”Bitcoin could run today with one-tenth of the mining power and be very very secure without any problems.”

All this said, crypto market analysis firm Coin Metrics says that the data we poses is simply not enough to know with any certainty how the world’s most popular crypto will act post-halving. This year, with not only BTC’s, but also the halvings of Bitcoin Cash (BCH), Bitcoin SV (BSV), and Zcash (ZEC), as well as Litecoin (LTC) 2019 halving, should give us plenty of info to work with, they conclude.