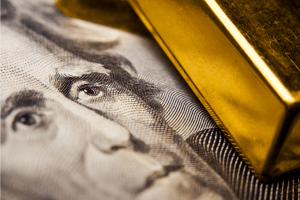 In 1971, the United States left the gold standard. Now, some people – particularly Bitcoiners – believe that the US and wider global population has largely suffered as a result. The government can print USD at will, in the process causing the kind of inflation that reduces the general population’s savings.

However, while certain developments since 1971 – the productivity-pay gap and the growth in public debt – might suggest that leaving the gold standard was a bad idea, most mainstream economists argue that it was a positive move overall, enabling economies to smooth the business cycle.

At the same time, they argue that most of the negative developments post-1971 are the result of other structural forces. That said, advocates of hard money, such as Bitcoin (BTC), and Austrian economics affirm that leaving the gold standard hurt prior historical trends in wage and productivity growth, as well as in public debt.

The director of the Fiscal and Budget Policy Project at the non-partisan R Street Institute, Jonathan Bydlak tells Cryptonews.com that the effects of leaving the Bretton Woods Agreement were mostly positive, if mixed.

“The obvious negative immediate result was the impact on the value of the dollar,” he says.

“Many argue that the erosion in its value that has occurred since the early 70s was an inevitable consequence of breaking its tie with gold.”

However, this downside notwithstanding, Bydlak explains that there are a number of other impacts to consider. “One is that since the inflation of the late 70s and early 80s, inflation and the business cycle have both no doubt been steadier than they were in the gold standard era.”

Bydlak admits that there have been financial crises since then. However, he adds that “each of these periods has tended to be milder than panics and recessions from the pre-Bretton Woods era.”

In essence, Bydlak says that the tradeoff in leaving the gold standard was mostly positive: “increased flexibility in using monetary and fiscal policy to respond to economic crises in return for less of a check on the value of the currency.”

“Leaving Bretton Woods helped advance understanding of the role of monetary policy and how to manage it to smooth business cycles, communicate effectively, and make it independent of the political process,” she says.

On the other hand, independent researcher Ben Prentice and Bitcoin podcaster Heavily Armed Clown (aka Collin from The Bitcoin Echo Chamber) – the individuals behind the WTF Happened In 1971? project – argue that departing from the gold standard disrupted a number of important macroeconomic relationships.

In particular, they point to how inflating the money supply “fundamentally damaged” the causal linkage between the replacement cost of assets and entrepreneurial profits. Put crudely, excess monetary expansion and inflation made assets (in the sense of business assets used to produce goods) more expensive to replace, which dampened profits and encouraged entrepreneurs and businesses to look more to purely financial activity for profits.

Nonetheless, unfortunate economic developments have followed since 1971. And for some commentators – and politicians – this is the result of leaving the gold standard.

Such thinking has been most vividly encapsulated by WTF Happened In 1971?, a website that has compiled a number of graphs which seem to show 1971 as the beginning of various unfortunate trends.

Most strikingly, a graph sourced from the Economic Policy Institute appears to show 1971 as the beginning of a productivity-pay gap. 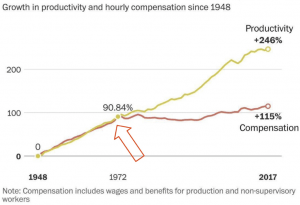 However, mainstream economists aren’t convinced that abandoning the gold standard and the productivity-pay gap are significantly linked.

“I don’t see any relationship here at all,” says Erica Groshen. “There is much debate about why this gap has emerged, but I know of no rigorous economic theory or empirical study that would point to this as a cause.”

She also stressed that needlessly pinning monetary policy arbitrarily to gold reserves would often be detrimental to the interests of workers.

The Economic Policy Institute also isn’t convinced for that matter. In its original posting of the above graph, it identified 1979 as the tipping point, and blamed rising inequality and economic policy choices as the main factors.

That said, while Heavily Armed Clown and Ben Prentice accept that the above factors have played a role in exacerbating the gap, they affirm that the fundamental shift began with 1971.

“The question we should be asking is not whether the gold standard created a hard and fast link between growth in productivity and growth in wages (Austrian economists do not deal in such certainties), but rather recognize that we have observed a breakage in this historical trend after the US Treasury’s ending of the Bretton Woods agreement in 1971.”

As an illustration, they point towards the financial sector in 2008. At the time, this sector “made up 7% of the [US] economy and only created 4% of the jobs and yet generated a third of all corporate profits.”

Prentice and Heavily Armed Clown regard this imbalance as highly questionable. “Why was there an emergence of such unprecedented profit models following this fundamental shift in monetary policy in 1971? Why does Apple, a technology engineering company with lower [research & development] spending as a [percentage] of sales than ever before, and with a warchest of USD 145 billion in cash, choose to borrow USD 17 billion in 2013?”

The answer, they conclude, “is because financial engineering in a society with artificially cheap credit has grown more profitable than entrepreneurship.”

Another development flagged up by WTF Happened In 1971? and gold standard champions is the explosion in US national debt.

For Bydlak, leaving the gold standard “certainly made [rising debt] possible.” That said, debt may have risen even under a gold standard.

“The gold standard helps restrict the supply of money, although the money supply can still increase pretty dramatically under a gold standard, even beyond how much is mined.”

For Erica Groshen, limiting debt is not necessarily a good thing, while a gold standard may not effectively restrain debt anyway.

“Without the ability of modern monetary authorities to smooth business cycles, overall output would be lower and conditions more chaotic. But fiscal policy decisions would not necessarily be affected any way or another.”

Ben Prentice and Heavily Armed Clown don’t agree with analysis at all.

“The unchecked nature of credit expansion alongside a treasury with a legal tender that has no tie to actual productivity and capital accumulation in a society, is incentivized to not only increase spending for the means of political power, but also to decrease the real value of outstanding federal debts via inflation,” they explain.

By contrast, they also contend that a gold standard would act as a corrective countermeasure to money expansion, since any significant growth in debt would increase the cost of borrowing, via a rise in the discount rate (which is what the Federal Reserve charges to US banks to borrow money).

“Under a gold standard (or similar hard money standard), debt expansion would cause a rise in discount rates, and likewise capital accumulation and debt liquidation would cause the opposite.”

While advocates of the restrained money supply would most likely support the reintroduction of some kind of hard money standard, be it gold or bitcoin, Erica Groshen argues that introducing a new gold standard “would be detrimental in all ways.”

Meanwhile, Bydlak thinks that the objectives of limiting inflation and debt would better be served by other mechanisms.

“Other alternatives would probably be better than the gold standard at accomplishing the advantages that gold brings (for example, competing currencies),” he concludes. “It’s also important to note that there is still a very real check on governments that grow too large — and that is consequences imposed by bond purchasers in the public marketplace.”

However, as alternatives keep coming, it seems that the world needs to take a fresh look at what happened in 1971 as it deals with the Coronavirus-triggered crisis, determining what will happen in the 2020s and beyond.
____