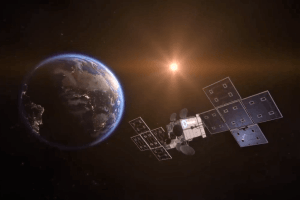 Canada-based major blockchain technology firm Blockstream has launched a new version of their satellite network that broadcasts the Bitcoin (BTC) blockchain around the world and announced satellite kits.

Blockstream Satellite 2.0 moved from a custom protocol to a new one (DVB-S2), which is meant to improve signal reliability and spectral efficiency, as well as deliver higher bitrates, the company said yesterday. It’s also compatible with the equipment, hence not requiring a dedicated computer for decoding.

Additionally, Blockstream said tat this update increases data capacity by more than 13 times, from c. 120 kbps to c. 1.6 Mbps, while spectrum bandwidth is increased 4 times, from 300 kHz to 1.2 MHz. These improvements allowed the maximum file size for user-broadcasted application program interface (API) transmissions to be increased as well, from 10 KB to 1 MB. Additional updated features, namely forward error correction (FEC) and lossless Bitcoin transaction compression, enabled the company “to reduce the volume of transmitted data by over 50% as compared to the uncompressed Bitcoin transaction data sent with the old forward error correction scheme.”

The network allows users to connect a Bitcoin full node and download the entirety of the Bitcoin blockchain, from the original genesis block in 2009 until today, without needing to connect to the internet. It also brings more coverage for the Asia-Pacific region.

This development follows the 1.0 network launch in August 2017, as well as the update which expanded network coverage to the Asia-Pacific region (in addition to South America, Europe, and Africa), and the launch of the Blockstream Satellite API Beta (Lightning-powered message API). The 1.0 network will be disabled on June 1, leaving the hardware still compatible with the 2.0 network, but requiring a software update and switching to the new 2.0 service.

Furthermore, the company has announced that satellite kits will soon be available for pre-order at the Blockstream Store, which will include two consumer-rate receiver kits ready to connect a Bitcoin node at home, and an optional antenna kit. This basic kit’s pre-sale price is USD 279, and there’s a pro kit for USD 749.

Learn more:
Blockstream Satellite API Is Live. What Can I Do With It?