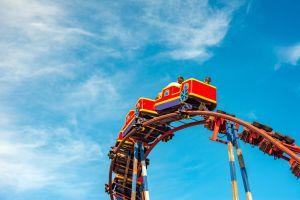 Bitcoin (BTC) holders may be in for a wild ride in the next few days, as an unusually large number of bitcoin futures & options contracts are set to expire this Friday on the institutionally-focused major derivatives exchange CME.

According to data from Skew, a firm that analyzes the crypto derivatives market, 23,000 bitcoin futures and 10,000 bitcoin options, making up approximately 50% of open interest in both markets, will expire on Friday – an event that traditionally brings increased volatility in the spot market as traders settle their positions.

@skewdotcom This will be quite an exciting close to the week

Tomorrow is the #Bitcoin Futures May expiry so this might get volatile again.

Despite all bitcoin products traded on the CME being settled in cash, and not in physical bitcoins, market volatility can still be expected given the large amount of arbitrage trading that is going on between the derivatives market and the physical spot market.

A similar situation also occurred in the market in late March this year, when bitcoin faced selling pressure in the days ahead of the expiry, as well as on the day itself. The event was also followed by selling over the weekend, leading to a gap down on the CME chart, which doesn’t include weekend data. 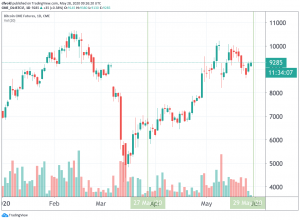 A similar large futures & options expiration on March 27 led to selling on the day and in the two following days, creating a gap down on the CME chart. Source: www.tradingview.com

Last year, an analysis by the crypto research firm Arcane Research even suggested that bitcoin has fallen 75% of the time before futures (and options) expire on the CME, igniting speculation about possible price manipulation by institutional traders.

While open interest in bitcoin options on the whole has been on the rise as of late, CME has seen stronger growth over the past month than competitors like Deribit, LedgerX, and OKEx, suggesting renewed institutional interest in bitcoin. 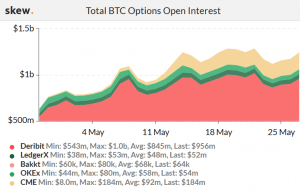 In the much bigger bitcoin futures market, however, the trend in favor of CME is less clear, with a larger number of other players also holding a firm position in the market, data from Skew shows. 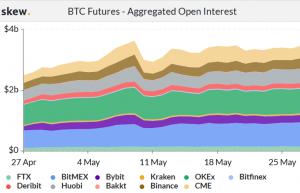 Writing in a commentary for Kitco News on Tuesday, the Singapore-based trading firm QCP Capital warned about the potential impact of the expirations, saying “something might be brewing” in the market. The firm also noted that although they “don’t see any particular catalyst for volatility,” it’s likely that some players are “hedging downside risk after the nightmare of Black Thursday.”

“We continue to favor selling short-tenor options especially Puts as 6-7k are price levels we would like to be accumulating BTC,” the firm concluded.