On Thursday, January 3rd, BitTorrent, Inc. said that it plans to launch a crypto token, called the BitTorrent token (BTT). While many have done something similar, CEO Justin Sun described the BTT token as having a competitive edge.

According to Sun, the BTT token is “the first in a series of steps to support a decentralized internet.” For the most part, the BitTorrent token will be used to achieve quicker download speeds. It can be bought, sold, and traded.

Speaking further on the matter, Sun said that “the BitTorrent client can introduce blockchain to hundreds of millions of users around the world.” The CEO, who also founded TRON, said it can also “empower a new generation of content creators.”

The BTT token will be available on Binance Launchpad, to non-US accounts. “We created Launchpad to help entrepreneurs launch their best projects and bring more use cases to the industry,” explains the CEO of Binance, Changpeng Zhao.

In Case You Don’t Know

Founded in 2004, BitTorrent was acquired by TRON in July of last year. The goal of the acquisition was to create “the largest decentralized Internet ecosystem in the world.” TRON paid around $140 million for the acquisition.

Proud to announce @BitTorrent and @uTorrent are now part of the #TRON family. BitTorrent is supported by over 100M active users. Together we are building the future of the decentralized Internet! Stay tuned for updates #TRONBT $TRX @Tronfoundation https://t.co/mQQqUeOaHv pic.twitter.com/eSYY4lWsXI

Hearing the news of the BTT token, it’s hard not to wonder how TRON is doing on the market, considering Justin Sun leads both.

>> Bitcoin Price: Holding Steady Near $3,800, Corrections Across the Market 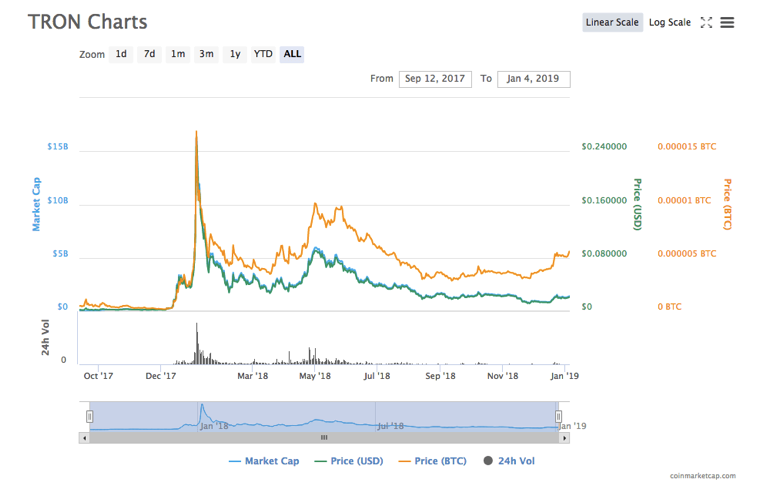 What do you think about BitTorrent launching a BTT token? Do you think it will prove to be as successful as Justin Sun believes it to be? Will it be a game changer in 2019?

Let us know what you think in the comments below, and make sure you stay updated with this story for new announcements, especially if you’re interested in cryptocurrency tokens!

Crypto Markets Drop Slightly, Further Losses May Be Needed to Spark Rally BitMEX CEO: Bitcoin Still An Experiment, But Has A Bright Future
Scroll to top