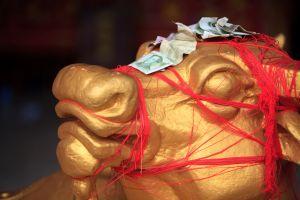 The Golden Cow in a Buddhist Temple, in Kunming, the capital and the largest city of Yunnan province. Source: iStock/Alex Potemkin

The Southwestern Chinese province of Yunnan has opened a new blockchain center that will allow companies to run a food traceability platform that will also fight the sale of fake products, with Beijing hopeful of creating another national hotspot for the technology.

The new center was officially unveiled on Sunday, per a report from state-run media outlet Xinhua.

A number of blockchain-powered initiatives will be operated from the new center, including a new blockchain platform for tracing food and consumer products – the first provincial-level platform of its kind in the country.

The new center is housed in the Wuhua Technology Industrial Park in Kunming, the provincial capital and the largest city in the relatively remote and less-developed Yunnan Province – an area not known for a preponderance of high-tech enterprises.

The facility will help promote blockchain adoption in Yunnan, and create a new national hub for the technology, per the same report.

The province has also introduced what it calls the “Peacock Code,” a network of companies and providers that will participate in tracing and sourcing locally produced goods.

Yunnan is one of the largest producers of the country’s agriculture products including tobacco, tea, sugar and coffee, while the peacock is regarded as sacred by ethnic minority communities in the province.

The blockchain platform will also be used to fulfill a range of other functions, including medical record management, legal evidence management, e-invoicing and supply chain financing – applications already used in many major Chinese cities.

Furthermore, the province has formed a blockchain industry alliance of companies, organizations, educational groups and research institutions, with 38 members from elsewhere in China or abroad.

China is continuing to pursue the adoption of blockchain technology and considers that it could become one of the world’s leading nations in this emerging sector.