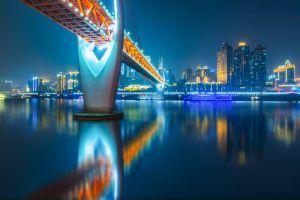 Chongqing and Shanghai are two of a handful of major cities in the country that began piloting the cross-border trade finance platform – the brainchild of the State Administration of Foreign Exchange (SAFE) – a year ago.

Authorities have expressed confidence in blockchain technology, which they believe will help simplify complex and labor-intensive import and export financing operations.

China’s foreign exchange and banking regulators hope to digitize financial data and information using distributed networks that allow information to be shared securely and in real-time.

Per news outlet Chongqing Daily, some 20 banks participated in Chongqing, along with 24 companies.

A government official was quoted by the newspaper as stating that a Chongqing-based cross-border commerce firm had successfully used the platform to complete a surgical mask-related transaction.

The company, said the official, imported a shipment of masks on February 24 and found itself needing to pay costs of USD 140,000 to a supplier in Hong Kong.

The Bank of China’s Chongqing branch verified the transaction and related tax documents via the platform – allowing the buyer to complete the payment on the same day.

China has been actively exploring a number of blockchain technology-related use cases for trade finance-related transactions. On Monday, the People’s Bank of China (PBOC), the country’s central bank, secured some USD 4.7 million in funding as it too begins work on a blockchain trade financing platform.

The SAFE began piloting its trade finance platform in 2019. It hopes to follow up with a nationwide rollout.

Three provinces with major trading interests – Jiangsu, Zhejiang and Fujian – are also involved in the pilot.