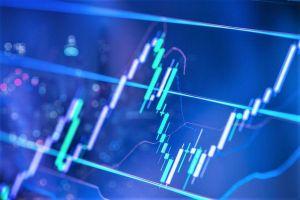 Fewer coins have seen their scores rise last week. Compared to only Stellar (XLM) last Monday, which was also the losing coin at the time, now we see Ethereum Classic (ETC), Binance Coin (BNB), and Cardano (ADA) in red, the last of which is in the positive zone nonetheless. Besides ADA’s sentscore of 6, only Bitcoin (BTC) and Ethereum (ETH) are in the positive zone this time around, with ETH’s sentscore going up from 6.1 to 6.5, and BTC’s from 6.6 to 7.

Since we mentioned Stellar, it wasn’t only pushed out of the top 10 list in a week, but it dropped from the 9th to the 14th spot. Though overthrown by ETC last Monday, Cardano surpassed ETC, now occupying the vacated 9th spot. 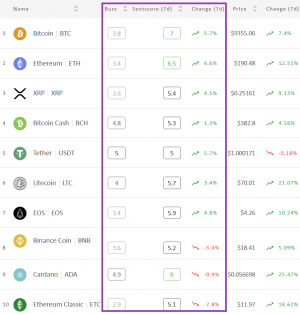 We have three winners this week: the three coins whose scores have risen the most. These are ETH with a rise of 6.6%, as well as BTC and Tether (USDT) with a rise of 5.7% each. Most of ETH’s aspects are strong: news with a score of 7.5, technicals 7.3, and fundamentals 6. Its social is somewhat lower at 5.3, while its buzz got only 3.4/10. Similarly, BTC has a high score of 9.1 in fundamentals, followed by 7.2 in technicals, and 6.9 in news, while its social has 5.1 and buzz 3.8/10. Tether is particularly interesting as, even though still scored the lowest, it had often been in the bottom these past few weeks, and even last week, it was the only coin with a score below 5, finally reaching 5 in the last seven days. Its highest score is in news (7.8), while its buzz and social are lower (5 each), and technicals and fundamentals the lowest (3.8 and 3.5, respectively). 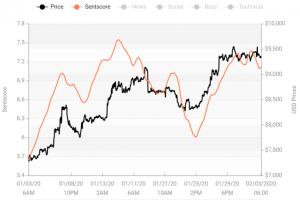 Shifting our attention from the 7-day to 1-day scores now, we find BTC’s sentscore at 7.1 (compared to the weekly 7), but with a change of -3%. ETH is also up by 0.1 to 6.6, while Cardano remains unchanged. Besides these three, three more are in the positive zone in the last 24 hours (XRP, LTC, and EOS), but five coins in total register a drop in their scores nonetheless.

Now going back to the 7-day average scores and looking at the coins besides the top 10, we see Monero (XMR) and Tezos in the positive zone, each with a score of 6. We see fewer coins with the score over 5, and after having no coins below 4 for two weeks, Holo (HOT) is back in the negative zone.

Omenics measures the market sentiment by calculating the sentscore, which aggregates the sentiment from news, social media, technical analysis, viral trends, and coin fundamentals-based upon their proprietary algorithms.
As their website explains, “Omenics aggregates trending news articles and viral social media posts into an all-in-one data platform, where you can also analyze content sentiment,” later adding, “Omenics combines the 2 sentiment indicators from news and social media with 3 additional verticals for technical analysis, coin fundamentals, and buzz, resulting in the sentscore which reports a general outlook for each coin.” For now, they are rating 39 cryptocurrencies.