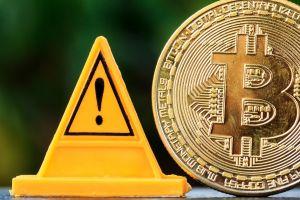 While some say that Bitcoin could be scaled by increasing its block size, allowing more transaction per block, this would worsen the assurances of the transactions, Hasu said in a recent post on Deribit blog, adding that Bitcoin protects its properties by excluding usage beyond the safe capacity limit. However, “Bitcoin’s ability to exclude users is smaller than commonly assumed”:

In a future where hundreds of millions of people use BTC, most of them through the custodial banking layer, the banks would be using the base chain as an interbank settlement network, while users would trade in Bitcoin IOUs that represent Bitcoin deposits, Hasu said. The system would be kept in check if users could switch at any point to a competitor, including the system’s trustless layers. But, if they are locked in, which depends on the exit cost from the system, then the power is in the hands of the banks and governments.

Though it’s difficult for the governments to control the network layer, they don’t need to as long as they have control over the banks. The governments don’t have to cancel redeemability for Bitcoin either, as the exit cost can grow large organically, which could permanently lock users in a higher layer, unable to move to a trustless system, which then governments could use to place taxes or rule changes in the system.

Furthermore, said Hasu, “there exists a feedback loop that makes custodial layers more attractive the larger they become, driving further users to them.” Eventually, noncustodial users could “find themselves facing the option to use custodial options or stop using Bitcoin altogether.”

That said, the analyst offered two ways to minimize this systematic risk from a custodial banking layer: 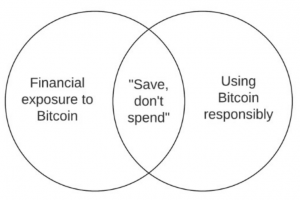 Hasu noted that many people believe that moving too slow is a safer option for BTC than moving too fast.

“This would be true if Bitcoin could grow at its own pace,” argues the analyst, “but it can’t. We must make sure that enough demand from the market can be met with trustless capacity, or risk that the custodial banking system will forever encumber the base layer.”

The discussion moved to Twitter, where Howard Berkowitz challenged Hasu’s comparison of custodial banks of the future to those in a gold standard, stating that BTC has two advantages over gold – instant audibility and ease of convertibility – which “will subject it to far more “market discipline” than any other money used beforehand.” Hasu argued that audibility can’t help in the scenario presented in the article, while convertibility is permissioned and can be canceled at any time. 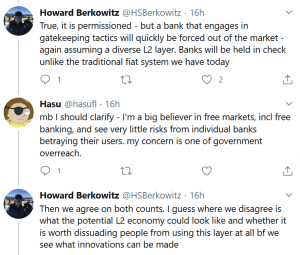 Some have seen this article as a pro-Ethereum piece, though there are disagreements on that front too. 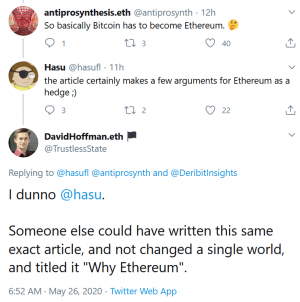