Crypto markets have taken a vertiginous plunge today, August 4, with Bitcoin (BTC) losing almost $500 in the six hours before press time to dip below $7,000, and all of the top ten cryptocurrencies by market cap in the red, as data from Coin360 shows.

Bitcoin (BTC) is trading around $7,028 to press time, having lost almost $500 on the day to plummet to a price point not seen since July 17. The leading cryptocurrency has seen an intra-day low of $6980, with some crypto analysts today noting that $6,800 has become its short-term critical support level. Bitcoin’s price percentage loss on the day is near 7 percent, with a weekly loss of about 15 percent and monthly gains squeezed to just 5 percent. 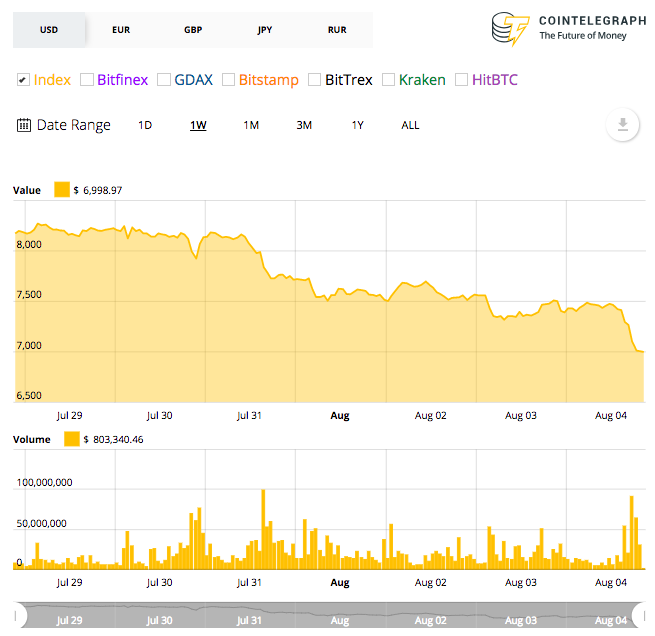 Ethereum (ETH) has seen a markedly less pronounced drop on its daily chart, losing just over 2 percent over a 24-hour period to press time to trade around $404. The altcoin’s fortunes have been shaky much of the week, having seen jagged losses since July 29, when the asset was still trading as high as $470. On the week, Ethereum is down over 13 percent, with monthly losses at nearly 15 percent. 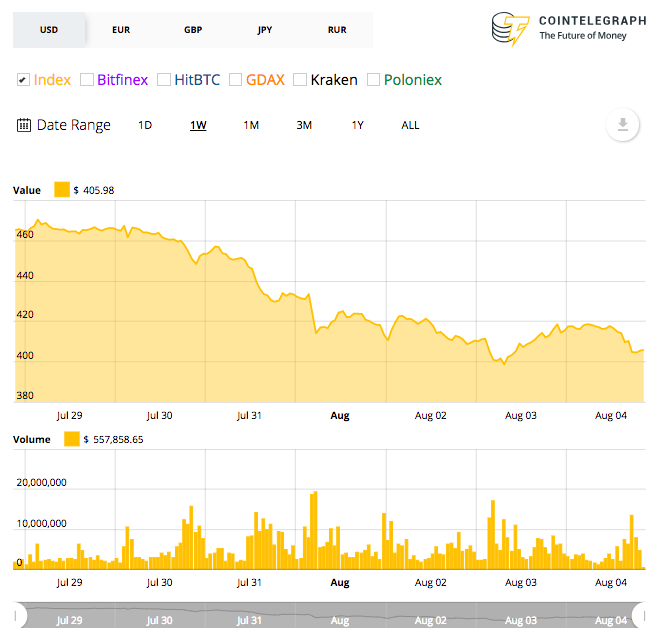 On CoinMarketCap’s listings, none of the top ten cryptocurrencies are in the green to press time.

Taking an even heftier hit than Bitcoin, Stellar (XLM) and IOTA (MIOTA) have seen losses of as high as around 9 and 10 percent respectively on the day. To press time, Stellar is trading around $0.24 and IOTA around $0.84.

Among the top twenty coins by market cap, Ethereum Classic (ETC) is the major outlier, up almost 9 percent over the 24-hour period to trade at about $16 to press time. The altcoin’s solid gains kicked off late August 3, probably due to news of the asset’s imminent listing on major U.S. crypto exchange and wallet service provider Coinbase as of August 7. Since its spike, the coin has traded sideways most of today, seemingly immunized from the major losses in the wider crypto markets. 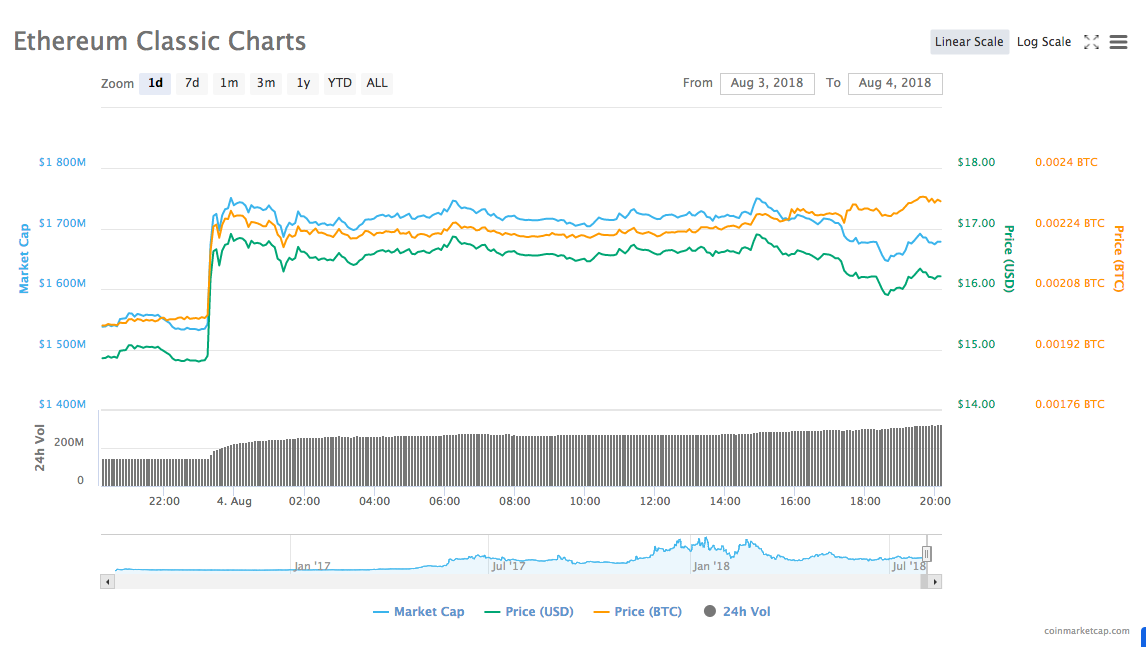 Total market capitalization of all cryptocurrencies has plunged down to around $253 billion –– over $13 billion lost in the six hours before press time, and a staggering $50 billion lower than their July 26 surge to $303.7 billion. 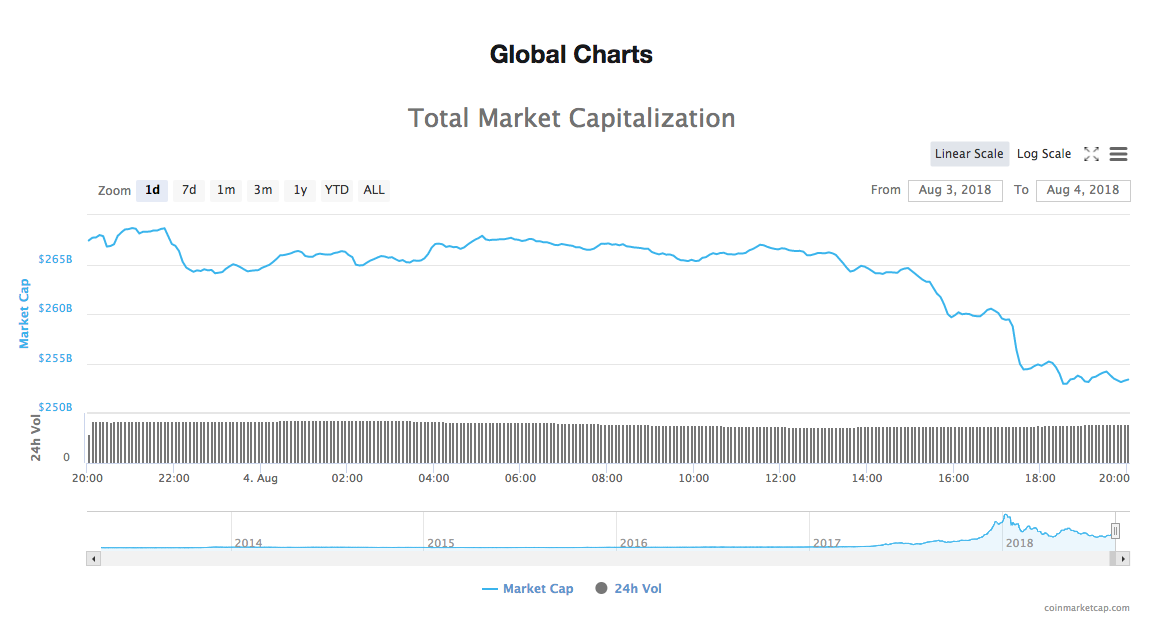 The markets’ nosedive today is in stark contrast to yesterday’s major news that Intercontinental Exchange (ICE) –– the operator of 23 leading global exchanges including the New York Stock Exchange (NYSE) –– plans to create a global ecosystem for digital assets that would cover the spectrum from federally regulated markets and warehousing to merchant and consumer needs.

ICE moreover plans to launch physically-delivered BTC futures contracts this November, distinct from those currently offered on CME and CBOE that are ultimately settled in fiat.

The likes of Starbucks and Microsoft are on board for the new venture, dubbed “Bakkt,” which will begin by offering Bitcoin-fiat conversion for consumers to purchase everyday goods with crypto.

ICE’s unveiling of Bakkt prompted CNBC’s Brian Kelly today to suggest that this is “the biggest Bitcoin news of the year,” advocating that now is a good “point of entry” for investors ahead of crypto’s impending institutionalization.