Many people in the crypto space had written off Digitex Futures. The company with ambitious plans to remove commissions from bitcoin futures trading failed to deliver on its promises twice. Yet, after some very public scraps with development teams and backlash from investors, the company is gearing up for its public testnet launch on Nov 30. Closed testing has already begun–and the feedback is said to be extremely positive.

Digitex Finally Has a Working Product

So far, around 100 or so testers are taking a look at the change. The company is calling this the “Alpha” group who is tasked with finding bugs, reporting abnormalities, playing around with the platform, and providing their feedback. This group is made up of experienced traders, Digitex supporters, and some key influencers in the space who will be sharing their thoughts, demos, and reviews on the testnet.

You can see one of the early video reviews below.

But as CEO Adam Todd told NewsBTC, “We’re urging them to remember that this is a testnet and a bare-bones version. We want people to do their best to uncover bugs, and to give us feedback. We’re developing the testnet every day and already have incorporated a lot of the early testers’ suggestions so that when we get to mainnet, the platform will have some sick features and be rock solid.”

Along with onboarding the first traders, Digitex has created a Telegram group for them to share their experiences, chat together, ask questions, get support, and provide comments. On Monday of this week, Adam held a live AMA with the group as well and answered a mountain of questions. There are indeed some bugs, with some traders reporting screen freezes and other glitches–as one tester said: “it is a testnet, after all.”

However, the initial feedback, on the whole, continues to be extremely positive. It appears that the company that came close to a disastrous end is finding its feet at last.

Initial Feedback of the User Interface

The overwhelming comments are with regards to the user interface. As an ex-futures trader, Adam is bringing the trading ladder from traditional markets over to bitcoin futures. The trading ladder interface allows traders to place orders with one mouse click. They don’t have to go through any additional steps, keyboard strokes or mouse movements, and can really stay in the zone, watching the price move up and down on both sides of the ladder. 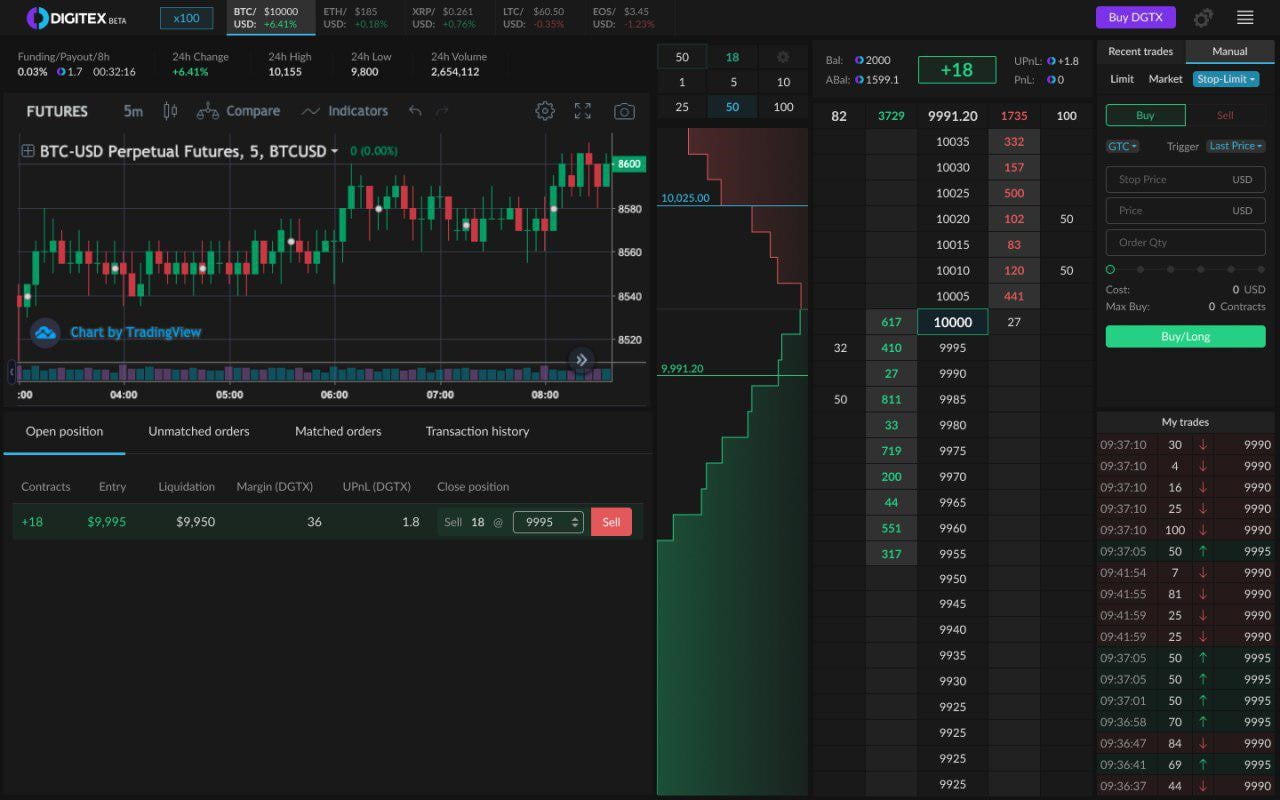 This is causing many testers to report that the platform is “highly addictive,” and saying things like “I am playing now for 15 min, this is sick… no fee trading is very addictive!” as well as similar comments like “This is cool, really cool. You can tell that Adam was a trader who got fed up with the sh*t on those trading platforms… It reminds me of traditional markets. So nice.”

One tester even jokingly wrote, “I’m just going to set up Digitex Detox Centre – so everyone can have some time away from the ladder.”

A First Look at Commission-Free Trading

Other testers have been enthused by the lack of commissions on trades. Of course, being a testnet, they are playing around with risky strategies and 100 leverage with no fear of losing actual funds. However, they are already beginning to see the potential effect that zero-fee trading will have when the project hits mainnet.

One tester said, “Man, no commissions is so liberating lol, just being able to take a scratch trade without losing money when your scalping is so freeing. You really have to experience it, you can’t just explain it.”

Of course, as Adam pointed out in the testnet AMA, the market makers are currently programmed to “Trade fast and loose. They will be a bit tighter in the mainnet, for now, we just wanted to have them creating a lot of activity for testing purposes.”

This led one tester to say, “The big thing for me is I can’t wait to see how the market makers behave during mainnet, when they are “calmed” down but still active as Adam said… I’ve never experienced market makers that weren’t trying to make a profit so, I’m really curious about how it will be like when trading it.”

Heading in the Right Direction

The Digitex support team and its development partners are now working incessantly to improve the platform and roll out new features. Adam himself is a self-described perfectionist and is driving his developers crazy with the unending iterations of new ideas and features to include in the interface.

Bugs are being uncovered quickly and Community Manager Gary Finlay said that many of the bugs being reported are now being duplicated which “is a very good sign as it means the main issues are rising to the surface quickly.”

There’s still some way to go before the mainnet launch. Adam wouldn’t commit to a date, although hasn’t ruled out Q1 2020 either. It will be interesting to see if Digitex can truly deliver the exchange it promised to redefine the way that bitcoin futures are traded once and for all. While nothing is certain in this space, early signs are certainly looking good.

The post Digitex Futures Alpha Testing Is Causing Quite a Stir appeared first on NewsBTC.