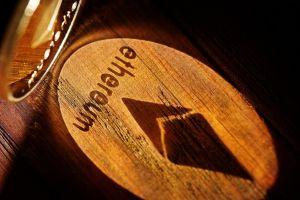 ERC20 tokens are taking over the Ethereum (ETH) network, potentially hurting the network’s own coin ETH, according to an analyst. But all is not grim.

The ERC20 standard tokens are approaching 50% of the total value stored on Ethereum and “ETH is increasingly close to being flipped on its own blockchain,” said Ryan Watkins, an analyst at crypto researcher Messari, in his recent Twitter thread. He explained that whether this happens or not “will likely depend on the growth of stablecoins vs growth in the value of ETH.” 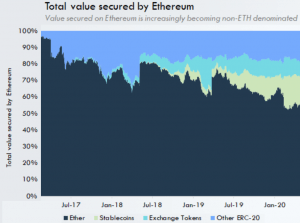 Watkins said that the last two years have seen “a complete transformation” of the manner in which value is stored and transferred on the Ethereum blockchain, but that assets being stored are just one side of this transformation in value on Ethereum. The other is the assets being used to move “significant” amounts of value. “Driven by the growth of stablecoins, Ethereum is on pace to settle more than USD 530 billion this year,” said Watkins. 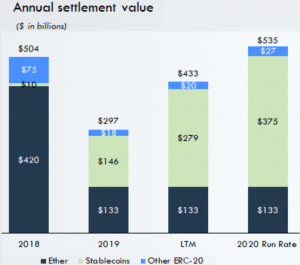 However, while ETH will remain the native token of the network regardless of what happens, there’s a fear that its involvement could be pushed onto the backburner as ERC20 tokens continue to rise.

“ETH’s decreasing role as a [means of payment] may not be positive for ETH, at least in the long-term. However, the Ethereum community well understands the need to maintain ETH’s privileged position on the Ethereum blockchain,” Watkins said.

Another crypto market researcher, Coin Metrics, also warned recently that though ETH has a “credible claim as money” within the Cryptosphere, stablecoins rise as its challengers.

However, Watkins said that “Ethereum is being used more than ever” and that in just two years it “has evolved from a blank canvas to an agglomeration of novel forms of value and use cases.” In his view, ETH’s position as Ethereum’s primary store of value is solidified by its use in decentralized finance (DeFi). It’s the reserve asset for Ethereum financial system because “ETH is and will always be the most trust-minimized asset available on Ethereum.”

Watkins concluded that Ethereum’s growing usage, as an indication of trust and its inherent quality, is positive for its future, regardless of what happens to ETH. Another advantage is the network’s programmability, he said. If, for whatever reason, its current use case disappears or weakens, another one will pop up, as Ethereum is able to adapt relatively fast. This also leads to higher fees, which have been the talk of the Cryptoverse recently, which is actually good for Ethereum, according to the analyst. Higher fees “point towards more sustainability, allowing a blockchain to rely less on new coin issuance for security over time,” he explained.

More fees means the network has more money for its own maintenance, meaning there’s no need for creating more coins that leads to inflation in majority of the cases. The decreased inflation rate is “critical in solidifying ETH’s perception as a scarce asset – an issue that has drawn criticism from the Bitcoin (BTC) community,” adding to its legitimacy.

In the end, it remains to be seen if the market as a whole is indifferent to what is happening, or if these many advantages will indeed lead to a growth in value of Ethereum, particularly now that it’s moving towards its second version, Serenity.
____

Learn more:
Ethereum Now ‘Significantly Undervalued’ – Researchers
Ethereum 1.0 Has ‘A Major Role’ To Play Before Merging With ETH 2.0
The ‘ETH Is Used 440x More Than Bitcoin’ Claim Is Not So Simple
How Ethereum Could Help The Global Economy Recover From A Recession