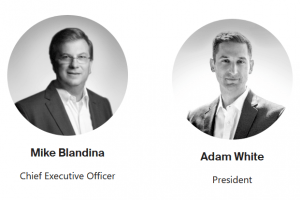 ICE announced today that it has appointed Mike Blandina as CEO of Bakkt, as well as Adam White as its President, starting December 20. This comes after founding CEO Kelly Loeffler departed the company as she has been appointed to the United States Senate to fill the seat of retiring Sen. Johnny Isakson.

Blandina has been with Bakkt since earlier this year as Chief Product Officer, says ICE, following 25 years of experience and service at a number of positions in the payment space, including the leadership roles at OneMarket, Westfield, PayPal, Google and the Blackhawk Network. As Bakkt’s CEO, his role is to chart the platform’s strategic direction, payment products and markets, but also to oversee its regulatory and financial performance.

White has joined the company in 2018 after its launch as Chief Operating Officer. He has had a longtime experience in the crypto space according to the announcement, as before his appointment at Bakkt, he had held a leadership role at major crypto exchange Coinbase. Prior to that, he had tested experimental aircrafts as an officer in the U.S. Air Force. White’s new role will entail a focus on digital asset markets, custody, trading, and strategic direction.

Finally, ICE shared that Bakkt set a new volume record of 6,226 physically delivered Bakkt Bitcoin Futures contracts traded at ICE Futures U.S. “earlier this week,” which is an increase of more than 25% compared to the previous record. For the following year, the company plans to deliver new trading products, an expanded custody offering, and a new consumer payments app, while “additional innovations [are] to be announced.”