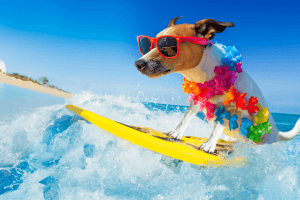 With bitcoin (BTC) still struggling to move beyond the important USD 10,000 level, some indicators point to increased volatility in June that could get the job done, major crypto exchange Kraken said in its latest Bitcoin Volatility Report.

The company noted that June has historically been one of the more volatile months for the bitcoin market, on average generating returns of around 14% for holders. As a result, increased volatility in June could turn out to become just what the market needs to propel bitcoin above the USD 10,000 barrier, they said.

In addition to the historically higher volatility in June, however, the report also pointed to another indicator that suggests more volatility may be ahead for the number one cryptocurrency.

Since 2016, bitcoin’s mempool transaction count – the number of transactions that are waiting to be confirmed miners – has “often served as a leading indicator” of volatility in the market, the exchange said, while adding that, at the time of writing, the transaction count was “its highest level in more than 28 months.” 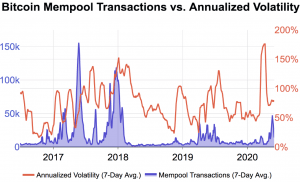 However, the number of unconfirmed transactions has decreased in June significantly.

The exchange further said that if BTC can gather enough momentum to break through the key resistance level around USD 10,000, “and set a higher-high in the macro trend,” an argument could be made that the cryptocurrency “is entering a new bull market.” If It fails at breaking through, however, a retracement down to support around USD 6,300 is possible, the report warned.

Kraken also touched upon correlations between bitcoin, the stock market and gold, saying that the correlation between bitcoin and the S&P 500 stock index has fallen continuously throughout May. Meanwhile, bitcoin’s correlation with gold has also fallen from a 9-month high of 0.86 reached in March, to a currently “modestly positive” level of 0.5.

“We believe that if traditional markets fail to hold their ground, correlations among all assets, including bitcoin, will rise as markets fall back into bear market territory,” the report said.