All attention has been focused squarely on Libra this week as Facebook enters the crypto arena with its centralized offering. This new digital token is nothing like crypto as we know it and one of the year’s top performers by a mile, Litecoin, is still going strong.

Over the past 24 hours LTC has regained its Monday losses and topped out at an intraday high of just north of $135 a few hours ago. It has held on to these gains during Asian trading this morning as daily volume has increased to $3.7 billion. 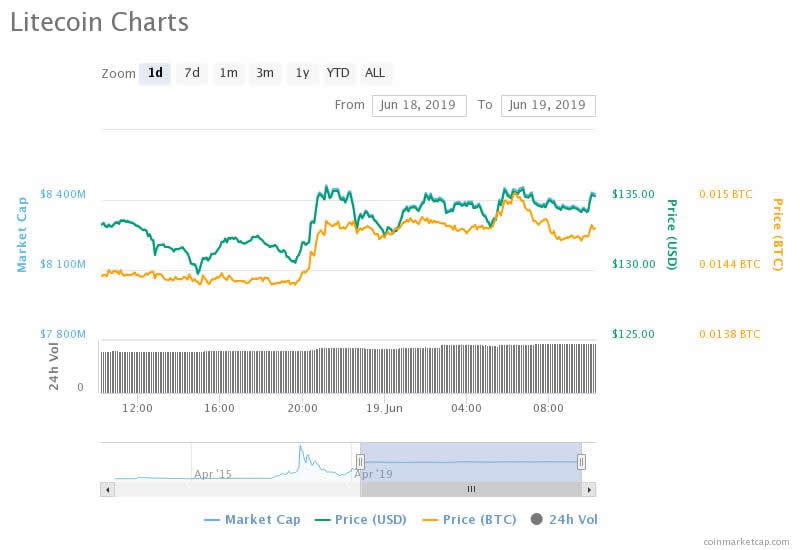 Litecoin market cap is currently $8.37 billion, double what it was at the end of April. LTC has fallen slightly on the week, cooling off from its 2019 high of $142 on June 12th. Over the past 30 days, however, Litecoin has made a whopping 50 percent gain.

Where Next For Litecoin?

Analysts and traders are looking at the charts for the next move as LTC appears to be starting to consolidate. Trader ‘CryptoFibonacci’, who offers daily analysis on the top cryptos, has identified key areas of support should a pullback occur.

“Just sort of consolidating here. 10 ema has held. 125-126 is some key support. If that is broken, it would bring the 115 area into play and possibly 107. Almost looks like a bull pennant on this one too.”

Just sort of consolidating here. 10 ema has held. 125-126 is some key support. If that is broken, it would bring the 115 area into play and possibly 107. Almost looks like a bull pennant on this one too.#LTC #Litecoin pic.twitter.com/ASbKQRCfRg

The Fibonacci levels have come into play previously and the mid $120s zone would be one for further accumulation leading up to the halving.

With just 47 days to go, there is likely to be a run up to $150 for LTC in the next few weeks. Fellow trader and investor ‘Crypto Rand’ has targeted $160.

I can't stop myself from adding more $LTC

According to a recent announcement the Litecoin Foundation has teamed up with Bibox Exchange and Ternio to release a special edition Litecoin debit card. The BlockCard will enable users to spend crypto online or in physical stores anywhere that major credit cards are accepted.

“This is an exciting partnership for us as it furthers the Litecoin Foundation’s mission to create more use cases for spending Litecoin in everyday life. Leveraging Ternio’s BlockCard platform with Bibox’s exchange engine gives Litecoin holders unparalleled access to use their LTC at merchants around the world.”

The announcement added that Bibox will act as the custodian of funds leveraging its $200+ million worth of crypto trading volume to help route the deposits and spending for users. The debit card will be released in the US first before it is made available to other markets.

There are big things ahead for Litecoin and the halving is only half of it.