All eyes have been on Bitcoin since its peak on Thursday. Many have been expecting a wider correction which so far has failed to materialize. As BTC consolidates today, some of its siblings have started taking off and Litecoin is leading the pack during weekend trading.

Weekend trading has been pretty weak for most of the altcoins. Very few of them have made more than a couple of percent back from their double digit dumps on Friday. When the Bitcoin flash crash shaved $55 billion off crypto markets, Litecoin dumped back to $110. The correction resulted in a 24 percent slide from its recent high of $145.

Bitcoin’s correction was a similar 25 percent from $13,800 to a low of $10,300 before it started to recover again. At the moment BTC is back over $12,000 but Litecoin has pumped today reaching $135 again before starting to consolidate. 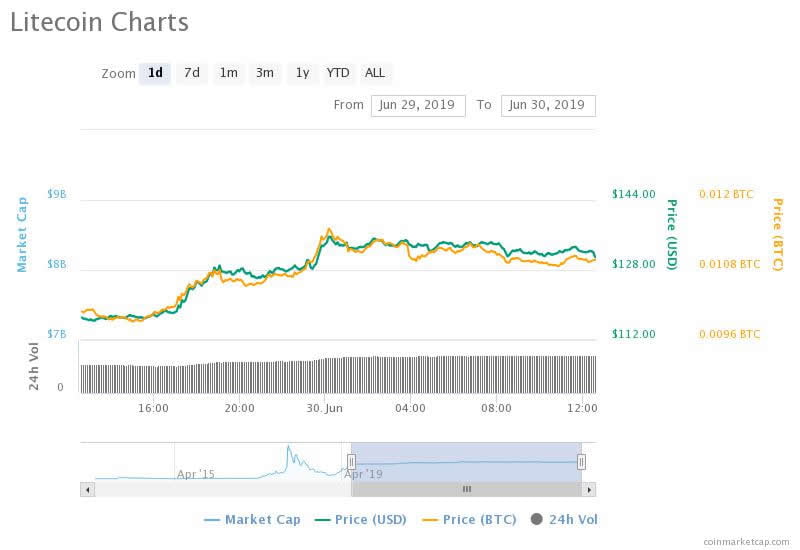 Daily volume for LTC has cranked up to $5.7 billion which has pushed market capitalization back above $8 billion allowing it to regain fourth spot from Bitcoin Cash which has not moved much in comparison. Litecoin has now recovered almost all losses from the recent mini-pullback. On the year LTC has made an epic 333 percent gain, outperforming even Bitcoin.

The Litecoin halving is now almost a month away, slated for August 5. Now that LTC has shown resilience and recovered all losses while the altcoins around it are still weakened, further gains are likely regardless of what Bitcoin does in the coming days.

The next major resistance level for LTC is around $180, with a higher one at $225. When Litecoin moves, it does not hang around. In early December 2017, LTC was priced similarly to today, however over the next week or so it pumped to $370 adding almost 175 percent in just a few days. This was purely speculative FOMO with no technical or fundamental indicators such as a halving event.

Litecoin’s last halving was in August 2015. The month before this happened, LTC surged a mind blowing 400 percent from $1.70 to $8.50 so a similar pump this time around may not be out of the question.

Other altcoins have been asleep comparatively. Bitcoin Cash has lost its fourth spot to LTC despite adding 5 percent today to reach $440. EOS has been very lackluster clawing back just a few percent from its recent double digit dump, and Binance Coin is also pretty quiet today.

A few of the alts besides Litecoin are back on track this Sunday however. Chainlink is still cranking on the recent Coinbase Pro listing as LINK surges 23 percent to top $4. BAT is also going well with 12 percent gained and BitTorrent Token is up 10 percent as the BT file system testnet is about to go live in a couple of days.

The post Litecoin Surged 400% The Month Before Last Halving, Will it Repeat This Time? appeared first on NewsBTC.