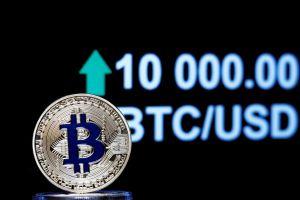 As bitcoin (BTC) once again reached the crucial USD 10,000 barrier on Monday night (UTC time), the BTC chart is showing signs of what could be a major breakout after a series of failed attempts at moving higher.

Other coins from the top 10 are up by around 3%-7% in a day, while the total market capitalization increased by 5%, to almost USD 286 billion.

The breakout visible in the bitcoin chart occurred after the daily price candle (UTC time) closed above previous highs from May 7 and May 19, respectively. After a slight correction lower on Tuesday morning, bitcoin is still above these highs, which could be seen as a sign of strength. 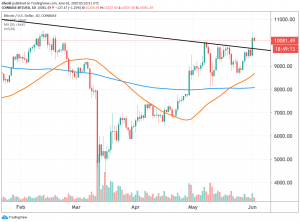 Bitcoin has broken through an important trend line going back to the market top from June 2019. Source: www.tradingview.com

The break higher for bitcoin was also spotted by the popular financial commentator Raoul Pal of Real Vision Group, who shared with his followers a chart with the comment “No big deal. Here is bitcoin breaking out…”

And here it is on a log scale… this is the biggest chart pattern break out thus far… pic.twitter.com/WSNYLLvvrT

On the major crypto derivatives exchange BitMEX, the breakout caused a large amount of “buy liquidations” around 23:00 PM UTC time yesterday, with USD 146 million in buy liquidations seen between 23:00 and midnight.

A buy liquidation occurs when traders who have betted the market will fall ends up at a loss, and are forced by the exchange to buy back bitcoin to cover their short positions, sometimes pushing the price higher in the process.

“Cryptocurrencies have weathered the panic-selling storm that took place in March and seem poised to benefit from a wide-range of growing institutional interest,” Edward Moya, senior market analyst at Oanda, told Bloomberg. According to him, ethereum (ETH) and bitcoin cash (BCH) “seem to have bigger upside potential” also.

In addition to a flurry of activity in the derivatives side of the market, spot trading on Coinbase also appears to have been affected by the surging price again, with the exchange reporting that it experienced “connectivity issues” for about 45 minutes Monday night.

According to Coinbase’s status page, the incident involved “increased latency” on the platform, which the exchange first started investigating at 23:14 UTC, right when the market was beginning to pump higher.
____

You guys kill the run everytime. I’m done with coinbase.

Also watch Gold vs Bitcoin. Of that chart breaks higher it will turbo boost Bitcoin.

This is the first time ever that I’m not excited for “number go up” for bitcoin.

We need a dramatic & immediate leadership change in the U.S. or we’re in real trouble.