Bitcoin has just emerged from its worst month in terms of price declines for seven years. The big daddy of crypto has shed almost 40% in this one month alone as it pulled the entire crypto market down to new yearly lows.

Bitcoin Dumps Over a Third of its Value in a Month

Starting out at over $6,500 on November 1st Bitcoin plummeted around 35% to end the month at around $4,280 yesterday according to figures from Coinmarketcap. Naturally different indexes will have slightly different prices and taking time zones into consideration could make things look worse as BTC plunged again a few hours ago, still technically November in the US. 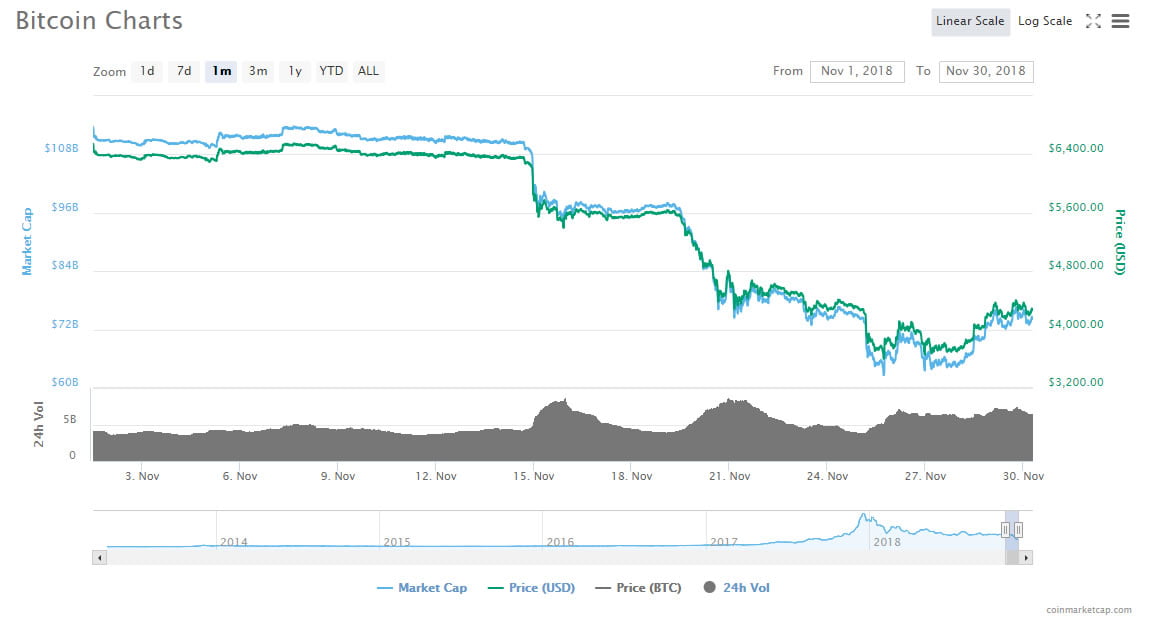 CNBC has noted that a 37 percent dump this month is the worst Bitcoin has had since it fell 39 percent in April 2011. Looking at the high to low figure for the month is even worse as BTC fell from over $6,500 to below $3,600 in just a couple of weeks marking a decrease of almost 45%.

In terms of market capitalization Bitcoin lost around $40 billion as it nosedived from $113 billion at the beginning of the month to $74 billion at the end of it according to CMC. CEO of Genesis Global Trading, Michael Moro, told CNBC it did not take much for the price to break down once support at $5,800 was broken;

“It’s unclear if this is a ‘bottom’ or a brief period of consolidation before next move down, but buyers are still maintaining some cash on the sidelines in case it does go lower,” before adding “While the split occurred on a different blockchain, there were still spill-over effects on other cryptos, including bitcoin,” in reference to the Bitcoin Cash fracas.

Bitcoin was not the only crypto in pain during November; the all took a massive hit, with Ethereum coming off worse than some of its brethren. Dumping almost 42% ETH fell from $200 to $117 last month. From high to low things look even worse with a fall of 53% from $220 to $103.

Bitcoin has dictated the ebb and flow of crypto markets since its inception. During November the total loss of capitalization in cryptocurrencies was a staggering $70 billion as a third of the market was wiped out in a week or so.

Bitcoin seems to be repeating patterns from the previous bear market in 2014-2015 in what some have described as a multi-quarter bottoming process. Further losses are likely and all indicators are pointing to another six months of Bitcoin remaining on the bottom.

The post November Has Been Bitcoin’s Worst Month for Seven Years appeared first on NewsBTC.