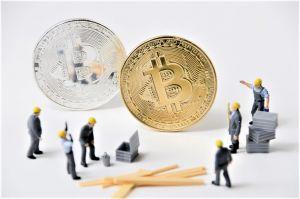 What is it that the Cryptoverse needs to do exactly to see the mass adoption of cryptocurrencies? According to the participants of a survey, there are some major barriers to crypto adoption, and these include the understanding of crypto, its security, lack of options to use it, and complicated buying system.

Crypto.com and The Economist have recently partnered up to explore the general public’s opinions on digital currencies in general, including cryptocurrencies, focusing on barriers, drivers and trust factors. Their subsequent white paper, aptly titled Digimentality, finds that the “trend of going cashless is well established” and strong. In a global survey of users of digital payments, conducted by The Economist Intelligence Unit in January and February, over 3,000 surveyed individuals have voted on what they find to be the largest barriers for greater digital currency adoption.

1. Education on its usage

The number one answer is not all that surprising but is of massive importance for the future of crypto – how does one use it? In total, 44% of surveyed people said that the main barrier to digital currency adoption is “use of digital currencies is not well understood.” Antony Lewis, author of The Basics of Bitcoins and Blockchains: An Introduction to Cryptocurrencies and the Technology that Powers Them, said that “You need some fundamental skills and competencies to deal with digital currencies, and not everyone has these.” Actually, in a separate question, the survey found that respondents with university or higher degrees were more than twice as likely to report having used cryptocurrencies than those with a high school diploma or vocational training.

The next in line, with 32% of the votes is the opinion that “the technology is not secure.” We might say that this point goes hand in hand with the education aspect as, while there’s never enough security within the Cryptoverse, perhaps the advancement made so far should be better promoted. Eva Julin, deputy head general secretariat at Sveriges Riksbank, Sweden’s Central Bank, stresses that cybercrime is the key challenge in this area.

3. Give more options to use it

28% of the respondents found that there are simply too few options for actually using digital currency. Again, we may say that, along with creating more options, the Cryptoverse may need to promote the already existing ones better, and as more people enter the space, with that rise in interest, more options will likely open.

4. Make it easier to find a place to buy crypto

A quarter of the respondents said that it’s difficult to know where exactly they can buy digital currencies.

A quarter of people also stated that the procedure to buy digital currencies is too complicated. (Learn more: Mark Cuban Might Finally Like Bitcoin If It Becomes ‘Grandma-Friendly’)

6. Prevent their use for illicit activities

It’s not surprising that many people wrongly believe that digital currencies are mostly used for fraudulent or illegal transactions – 25% of them, according to the survey. Most world’s regulators believe the same thing, urging for cryptocurrencies to be strictly regulated so that they wouldn’t be used for money laundering or financing of terrorist activities, for example. However, data shows that the darknet still accounts for less than 1% of all bitcoin (BTC) transactions.

Almost a quarter – 22% – of those asked said that they don’t believe that there’s intrinsic value behind digital currencies. Well, even major investment bank JPMorgan Chase & Co once said that Bitcoin has intrinsic value.

A point working for crypto, particularly the privacy-focused coins is that, in a separate question on the importance of data privacy in purchase decisions, 61% responded with ‘extremely important.” 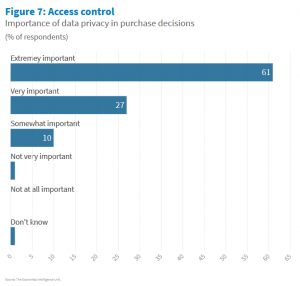 Lastly, in a separate question, only 26% of respondents found cryptocurrencies trustworthy, compared to 84% who say the same for cash or 54% for central bank digital currencies (CBDCs). 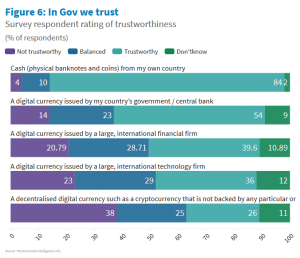 “Broadly, survey respondents see businesses rather than governments leading the way” to the cashless society, but “favor seems to outweigh fear.” The results of the survey have proved the acceptance of the cashless society concept, with great many new and existing technologies gradually replacing physical banknotes and coins. Cash is the third most popular means of payment, while 85% of survey respondents have owned, used or heard of decentralized digital currency such as a cryptocurrency, the paper says. Furthermore, 10% of respondents believe that their country is already cashless. 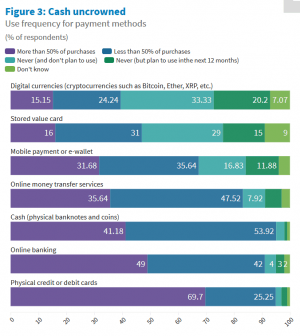 Meanwhile, 64% of survey respondents said that they used digital payments for over half of their purchases instead of physical banknotes, coins or credit cards in the past 12 months, while 20% said they hadn’t used it at all in the past year but that they plan to do so in the next 12 months. In the year, almost a third, or 28% of respondents believe they are “extremely likely” to use digital payments for most or all of their daily transactions. This indicates further growth of this type of payments, the paper concludes. 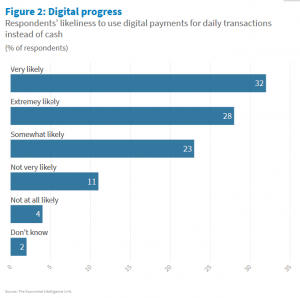 The survey further shows greater resistance to going cashless in developed economies, while younger people and people in developing economies show greater support for digital currencies. “As a parallel, it was these same populations that pushed mobile devices to become the dominant way the world goes online today,” says the report, adding that a decade ago “mobile payments were mostly theoretical as smartphones themselves were still new; now 32% of survey respondents say they use the platform for at least half of their purchases.”

Furthermore, G20 is considering issuing digital fiats, China’s been working on its CBDC (digital yuan) for a while now, and a digital dollar was recently discussed by the US politicians. Meanwhile, the card networks may be assisting this movement by ‘villainizing’ cash as “they don’t make any money from cash transactions,” Lewis says.

Finally, the report also notes the fears of the coronavirus being transmitted via cash as a factor that increases, let’s call it, the cashlessness of the society. It’s not only the individuals, but “more innovation is likely as central banks, tech firms, and financial firms enter the digital currency field.” Already central banks and governments, such as those of China, South Korea, and the US have taken measures to quarantine or remove cash from circulation. The Bank for International Settlements (BIS), however, argued recently that cash may be less dangerous than credit cards when it comes to virus transmission, adding that this fear of cash may speed up the road to CBDCs.