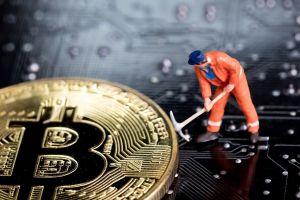 Less than a week before the third Bitcoin (BTC) mining reward halving, mining just became more difficult as more miners turned their machines on in the end of April.

On Tuesday, BTC mining difficulty, a measure showing how hard it is to compete for mining rewards, increased by 0.9%, to 16.1 T, moving closer to all-time high of 16.55 T, seen in March.

This difficulty will adjust only in about two weeks, meaning that in the first week after the halving miners will need to deal with the current competition and get a 50% smaller reward – BTC 6.25 instead of BTC 12.5 per block.

As reported, major crypto mining pool Poolin, estimated that BTC miners responsible for up to 30% of the network’s hashrate, or the computational power, are the most vulnerable and might be forced to turn the majority of their machines off after the halving next week.

“The first 1,008 blocks after the halving will have the difficulty from before the halving, which will be high, so less powerful miners (around 30%) will have to shut off for at least the first 1,008 blocks after halving,” Alejandro De La Torre, Vice President of Poolin, told Cryptonews.com. The mining difficulty is adjusted every 2016 blocks, or approximately every two weeks, meaning that less efficient miners might be out of the game for at least one week after the halving.

At the same time, hashrate keeps growing as miners are rushing to use their last chance to earn BTC 12.5 per block. 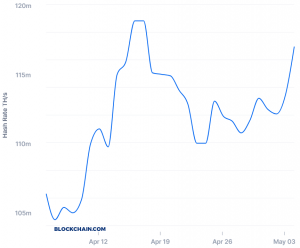 Bitcoin halving is estimated to happen on May 12.

XRP Has Seen 850 Days of Lower-Highs; Here’s Why Its Downtrend is Far from... “Pristine” Pattern: Bitcoin Will See a Colossal Surge After BTC Halving
Scroll to top