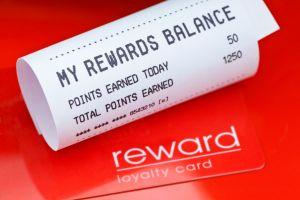 If the Cryptoverse is lucky, a new app could see billions of American rewards points converted into cryptocurrencies, such as bitcoin (BTC).

“The legacy payments infrastructure is ripe for disintermediation,” Jeff Sprecher, founder and CEO of Bakkt operator Intercontinental Exchange (ICE) told Fortune. “The Internet should make it possible to create a direct payment system that doesn’t use a third-party set of rails. It hit us that making rewards cash-like would be a step in that direction.”

As reported this week, ICE agreed to acquire Bridge2 Solutions, a provider of loyalty solutions for merchants and consumers. When Bridge2 Solutions ultimately joins Bakkt, the strategic combination will accelerate the development of the Bakkt consumer application, which will provide digital asset aggregation, conversion, and payments through a single platform for consumers around the world, the company said.

And ICE plans to develop an app with Bridge2 that would do away with credit card providers and banks, in favor of sponsor-issued digital credit cards that carry a merchant’s brand.

The companies say they are “testing a pilot program” for the app, which will be called Loyalty Pay. The app could allow users to claim rewards in four different categories.

An image provided to the media outlet by Bakkt shows a mock-up for a potential Loyalty Pay wallet, which shows a user’s funds divided into four sections, one of which is labeled “crypto.” The other three are “cash, “rewards” and “in-game” (likely currencies and tokens that can be used to buy in-game items and upgrade characters). 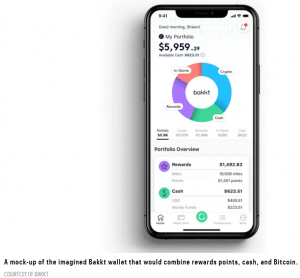 “Folks could not only make purchases with the app using cash or bitcoin but also seamlessly transfer money from one category to another. “

In a recent earnings call, Sprecher stated that “the next big hurdle for the company will be getting the app into consumer hands.”

It would mean that a share of the “USD 60 billion ready-to-go rewards,” held by Bridge2, might be eventually converted into cryptocurrencies.

The CEO also said that Bakkt would be “looking at consumer adoption more than revenue or expense” in 2020, and enthused that Bridge 2 “has a revenue stream both from trading and from the operation of all these rewards programs for 4,500 companies.”

“[The focus will be] not so much revenue and bottom line. It is broad adoption, I think, for 2020 that we’ll be looking toward.”

The CEO opined that a number of firms that run rewards programs were keen to attract younger customers – and could be keen to use crypto rewards as an incentive. He claimed that he was having “conversations across a broad range of industries” on the matter.

Sprecher said that companies were now asking themselves if “more millennials can be attracted to” Bridge2 partner companies “by virtue of having cryptocurrency in their ecosystem.”