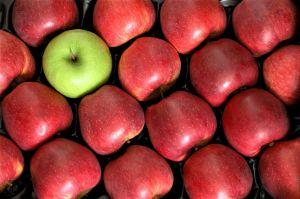 After an increase in price of about 170% since the beginning of 2020, there’s no denying that Tezos (XTZ) has been on a roll in the market this year. Today, the cryptoasset, which aims to challenge Ethereum (ETH) as the leading smart contract platform, stood out once again as the only coin in the top 10 that remains in positive territory for the week. 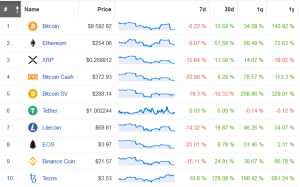 As previously reported, XTZ is the only cryptoasset in the top 10 that had a “golden cross” appear in its chart as early as in December last year. The most recent weekly surge also comes after tezos has seen a parabolic price rally in January and February.

This time around, however, it is unclear what exactly has propelled tezos to outperform the rest of the market, although the overall sentiment towards the asset on social media currently appears to be strong.

This largely comes after crypto exchanges Kraken and Coinbase, as well as hardware wallet maker Ledger, added staking support for users who hold XTZ, making it more convenient for a large number of users to take part in XTZ’s staking economy in return for rewards.

In terms of technical analysis, we have previously reported that after the break-out above the USD 1.85 level in early February, there is little holding the price back before major resistance areas found around the USD 4.2 and USD 4.8 levels. Making the picture even more bullish is also the fact that previous resistance around the USD 2.5 has now become support for the price, acting as a layer of protection to the downside. 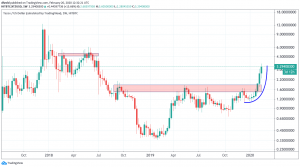 Trader Who Nailed Bitcoin’s $3,000 Bottom Fears More Downside is Near Handshake Gets into Coinmine Ahead of Possible Listing on Coinbase
Scroll to top