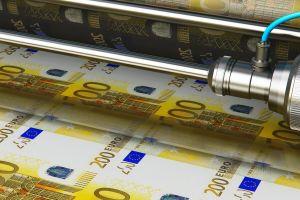 Crypto enthusiasts will be asking themselves if they can already hear money printers going BRRR in some of the world’s biggest economies – after the European Central Bank (ECB) decided to double down on its emergency bond-buying in the wake of the coronavirus pandemic.

Cryptocurrency advocates have been arguing that cash – already failing before the COVID-19 crisis, may not have what it takes to survive. And for those expecting that bitcoin (BTC) and altcoins will soon have their time in the sun, the ECB’s move will come as no surprise.

Bloomberg reports that the “vast majority of economists” it surveyed last week expected the bank to increase its bond spending by a much lower figure: EUR 500 billion (USD 567 billion).

And the ECB did not stop there. The bank extended the bonds’ duration by a minimum of the end of June 2021, with further extensions now seeming very likely.

In an official statement, the ECB also added that its bond-buying program is now set to hit the EUR 1,350 billion (USD 1,528 billion) mark, with interest rate levels unchanged.

“We expect [interest rates] to remain at their present or lower levels until we have seen the inflation outlook robustly converge to a level sufficiently close to, but below, 2% within our projection horizon, and such convergence has been consistently reflected in underlying inflation dynamics.”

Bloomberg remarked that the move “reflects how Europe is finally coming together with vast spending plans to drag the economy out of its worst recession in living memory.”

As well as the ECB’s spending spree, member states are also preparing to get their money printers into gear: Germany last week unveiled a new USD 147 billion spending package last week, while the EU is set for talks over setting up a joint recovery fund worth USD 850 billion.

If we don’t print more everything falls apart.

‘Ethereum-Based’ LIBOR Alternative Gets a Nod From Fed Chairman Ripple Continues to Stall, While Stellar Pulls Away
Scroll to top