Critics of cryptocurrency have long accused the industry of collusion. And a recent article from Bloomberg, about the “Tether Mafia” controlling the supply, has done little to allay these fears.

According to Coin Metrics, there are 318 addresses with a Tether holding of $1 million or more. And in total, these accounts make up $3.3 billion, or 80%, of the total Tether supply. 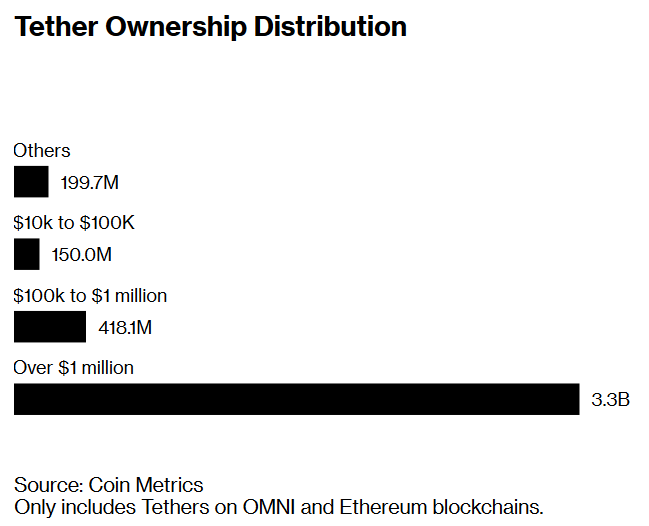 Since its launch in 2015, Tether has been subject to numerous controversies. All of which come down to the organization’s transparency in their dealings, chiefly their actual USD reserve holdings.

And despite the admission of a sizeable shortfall in USD reserves and the on-going investigation by the New York Attorney General (NYAG), Tether transactions continue to make up a fair chunk of total daily volume. And it remains to this day the number one stablecoin by a significant margin.

Steven Ehrlich, COO at the Wall Street Blockchain Alliance, considers Tether be to like Teflon. In that, regardless of what controversies come up, nothing sticks. This, Ehrlich believes, is down to:

“…the fact that traders have not had latency or slippage moving in and out of positions and there has been enough evidence produced over the last 12 months to suggest that even if Tether was not 100% collateralized, it was not far off.”

What Would Happen If USDT Disappeared Tomorrow?

The question is, can, and should traders continue to ignore the risk. Especially so considering that a single entity can hold more than one address. Meaning the scope for market manipulation, by the “Tether Mafia,” is higher than the data suggests.

And while the NYAG has yet to report anything definitive, should they find indisputable evidence of Tether/Bitfinex fraud, there is no doubt that Bitcoin would suffer. And by extension, so would the rest of the cryptocurrency market.

In a worst-case scenario, one commentator sees a collapse of the entire market. With traders exiting en mass to minimize losses. He said:

“If the shock is sufficiently bad, it would be reasonable to expect a repricing of assets that could take valuations back to 2016 or 2015 levels.”

However, others take a more pragmatic view. Analyst, Sylvain Ribes believes that investors would be wise to consider the possibility of authorities shutting down Tether. But even if this happened, investors should not be fearful of the aftermath.

This is because Tether’s liquidity impact on Bitcoin has been greatly exaggerated by mainstream outlets, including CoinMarketCap. Ribes said:

“For indeed Bitcoin’s liquidity is widely distributed beyond USDT, and, as importantly, among exchanges, ensuring that the market would remain structurally similar and sound.”

As such, while prices may tank in the short-term, Ribes does not expect a single player to affect the entire market now, unlike in the days of MT. Gox. He concluded:

“Tether’s smothering hold on Bitcoin’s liquidity proves to largely be a fantasy.”

The post The Tether Mafia Control 80% Of Supply, Should Investors Be Concerned? appeared first on NewsBTC.