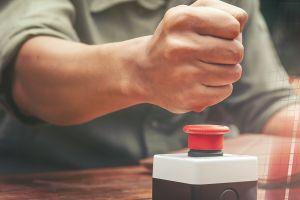 Bitcoin (BTC) miners responsible for up to 30% of the network’s hashrate, or the computational power, are the most vulnerable and might be forced to turn the majority of their machines off after Bitcoin mining reward halving next week, according to Alejandro De La Torre, Vice President at major crypto mining pool Poolin.

Poolin looked into the hashrate distribution in order to see which of its miners are at the highest risk of shutting down – and it’s those that represent the lower quartile of network hashrate (up to 25 T/s). Assuming that the miner structure of the whole Bitcoin network is similar, the pool inferred that the miners in this range account for 15%-30% of the Bitcoin network’s overall hashrate. In the past month, Poolin was responsible for 17% of Bitcoin’s hashrate. 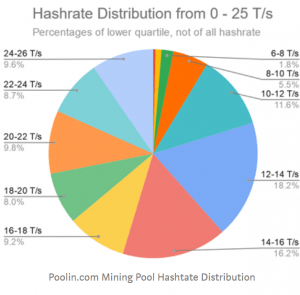 “While there may be some that are able to remain working given cheap enough electricity, we estimate that less than 15% of the lower quartile [of the hashrate] will remain,” the VP wrote in a recent blog post.

Meanwhile, to calculate profitability, three changing variables must be taken into account: costs, revenue, and difficulty. The price of BTC has rallied recently, but if it drops, “then inefficient miners will be squeezed out faster.” BTC is now (16:28 UTC) trading at 8,875 USD and is unchanged in a day. The price is up 15% in a week.

Actually, it’s possible to see at what electricity prices older miners will stop being profitable, according to De La Torre. Following the halving, the highest any of them can pay for electricity is 3.4 cents per kWh.

In the range between 10–16 T/s, which has the largest percentages of hashrate, only the Bitmain‘s Antminer S9K “barely breaks even” at 3 cents per kWh. This range represents 46% of all hashpower mining in the lowest quartile, and most of these will need to mine below 2 cents per kWh to remain profitable after the halving, but there are not many places that offer such cheap electricity. If this 2-cent electricity obstacle is somehow overcome, the miners would have such thin margins that a rise in mining difficulty will force them to go offline.

Speaking of mining difficulty, while it was estimated to drop a few days ago, Bitcoin mining pool BTC.com now estimates it’ll go up 1.41% tomorrow as more miners have turned their machines on.

“The first 1,008 blocks after the halving will have the difficulty from before the halving, which will be high, so less powerful miners (around 30%) will have to shut off for at least the first 1,008 blocks after halving,” De La Torre, told Cryptonews.com. The mining difficulty is adjusted every 2016 blocks, or approximately every two weeks, meaning that less efficient miners might be out of the game for at least one week after the halving.

Meanwhile, token data and rating agency TokenInsight also notes in their latest report that older equipment is phasing out. Before the market crash on March 12, the marginal profit gap between the two generations of mining machines (Antminer S17+ and Antminer S9) was 35%, but after it, and despite the profit margin bouncing back “significantly,” that gap increased to 40%. Furthermore, “miner’s profit still heavily depends on the block reward rather than the network transaction fees,” with miner revenue from fees accounting for an average of 1.5% from total mining reward.

TokenInsight also found that the industry hype surrounding BTC’s 3rd halving resulted “in an unhealthy state of the market” in the first quarter of this year. As the halving is approaching, “market volatility is expected in the near future while the Bitcoin network experiences a chaotic period in the short term to adjust itself back to an equilibrium state post-halving, and ultimately achieving a more efficient blockchain network.”
___
Learn more:
This Miner Buys 1,000 New Antminers as Bitcoin Halving Looms
How Healthy Will the Bitcoin Network Be Post-halving?
This Chinese Move Could Help Local Miners After Bitcoin Halving
How Will Bitcoin Halving Affect Its Security?