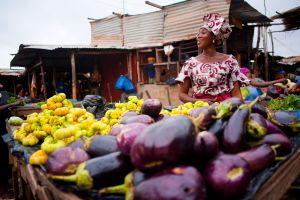 In some regions, over 50% of the population are unbanked and the problem is much worse for women, according to a quarterly review by the Bank for International Settlements (BIS), which acts as a central authority for the world’s leading central banks.

In a special feature on innovations in payments, included in the review, Morten Linnemann Bech, Head of Secretariat of the Committee on Payments and Market Infrastructures at BIS, and Jenny Hancock, Member of Secretariat at the same Committee, argue that traditional banking services are still yet to reach large swathes of the populations in parts of the Middle East and North Africa and Sub-Saharan Africa, with women particularly affected.

“While almost all adults in North America, Europe and other advanced economies have a transaction account, in […] Africa and the Arab world, the share not having an account exceeds 50%. Everywhere, the problem is much worse for women.”

In Sub-Saharan Africa, close to 64% of the female population lacks access to banking services, and the same goes for over 48% of the male population.

In the Middle East and North Africa, just under 64% of females and around 40% of males are unbanked. 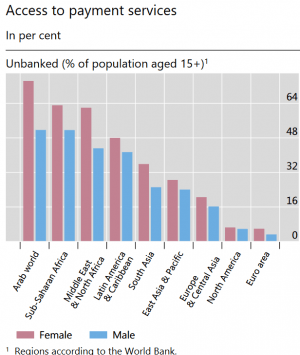 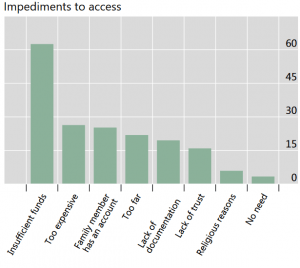 “Financial exclusion is often part of a much wider social exclusion, with individuals also lacking access to education, insurance and healthcare. Payments are the gateway to other financial services, such as savings accounts, credit or insurance, which allow individuals to invest and protect their income against risks. Access to a basic bank account has been shown to reduce poverty, as it promotes saving and supports better financial management,” according to the authors.

The BIS states that it believes payment innovations could help resolve the problem, stating,

“There are two major shortcomings in payments: access and cross-border payments.”

Cross-border payments, it says, are “slow, expensive and opaque” – an area where stablecoin initiatives and cryptocurrencies could certainly be of assistance.

“The interaction of these two shortcomings is a particular challenge for emerging market and developing economies, where remittances account for a substantial proportion of GDP. Recent stablecoin initiatives have highlighted these shortcomings and the importance of improving the access to transaction accounts and cross-border payments in particular.”

Bech and Hancock conclude that while innovation in domestic payments continues to occur, shortcomings in access and cross-border payments remain.

“Access issues can be addressed through targeted interventions in individual jurisdictions. Quantification of the extent and relative importance of the various drivers facilitates such interventions. Fintech is also likely to improve universal access to and frequent usage of transaction accounts,” the add, stressing that the way to address the problems surrounding cross-border payments is less clear.