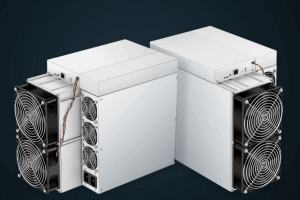 Publicly traded crypto mining company Riot Blockchain, Inc. says it has purchased 1,000 next generation mining machines, as the Bitcoin (BTC) miners brace for the upcoming halving in mining rewards, expected to occur on May 12.

The company said it has recently completed a purchase of 1,000 units of the next generation Bitmain‘s S19 (110 TH) Pro Antminer machine, worth an estimated USD 2.4 million.

Riot Blockchain, which exclusively mines BTC, bitcoin cash (BCH), and litecoin (LTC), further said that the new investment was paid for with cash on hand, and that it estimates the new machines will increase its aggregate operating hashrate, or computing power, by 46%, to about 358 petahash per second.

The new mining machines are expected to be delivered by early July, Riot Blockchain said in its announcement. As such, the mining company will have to continue working without these more efficient machines for at least two months after the halving in mining rewards takes place.

In 2019, the company invested in 4,000 Bitmain S17 Pro Antminers, which when deployed in early 2020 resulted in an increase in Riot’s fully owned hashing power capacity to approximately 248 Petahash.

Riot Blockchain operates a major mining farm in a leased facility in Oklahoma City in the US, and says it produced 944 newly minted BTC (USD 8.3 million) in 2019 and increased bitcoin inventory 206% year-over-year to BTC 514 BTC at December 31, 2019.

The company recorded revenue from cryptocurrency mining of USD 6.74 million last year, down from 7.75 million in 2018. However, high operating costs still made the mining operations unprofitable, with a reported loss of approximately USD 20 million last year, or 67% smaller than in 2018, the company’s financial statement for 2019 revealed.

Also, at December 31, 2019, the Riot Blockchain had USD 11.3 million in cash and cryptocurrencies, or 11 times more than a year earlier.

Listed on the Nasdaq stock exchange under the ticker RIOT, the company’s stock has seen mixed performance this year, which has largely mirrored the bitcoin price. Like bitcoin, the stock saw steep declines in late February and early March, but has now recovered nearly all of its losses. 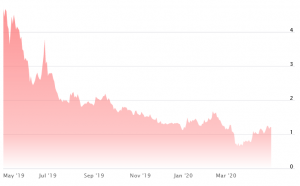 Ripple Positively Continue Pausing XRP Sales as Volume Spikes a Whopping 72... CryptoSlots donates all proceeds from new slot to the fight against coronav...
Scroll to top