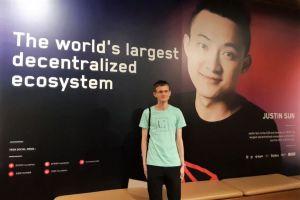 For several weeks now, certain Bitcoiners have been trolling the Ethereum camp, claiming that Justin Sun and his Tron are coming to take its throne as the platform of choice for blockchain-based apps and development. It might be not surprising, as Ethereans are intensifying their efforts to push the “ether is money” narrative, thus increasing competition with Bitcoin.

However, the provocations raise a serious question: just how well does Tron compare to Ethereum, objectively? Well, according to a number of industry observers, Tron is a better platform in technical terms, although it isn’t as decentralized and doesn’t have as healthy a community of developers.

For the sake of context, the whole Tron vs Ethereum debate was kicked off by a viral tweet from Opendime and ColdCard founder Rodolfo Novak (aka @NVK), who posted a picture of himself with Tron founder Justin Sun and Blockstream’s CEO Adam Back.

We have a plan. #Ethereum is over. Tron moving to #liquidnetwork on #bitcoin. Cc @udiWertheimer https://t.co/XEuw11PQKX

Needless to say, many such tweets come from people who, like Blockstream’s Samson Mow and Adam Back, may have an interest in promoting Tron over Ethereum.

Still, some independent industry observers do agree that, at least in technical terms, Tron is more advanced than Ethereum. Glen Goodman, a cryptoasset analyst and the author of The Crypto Trader, points out that it can currently operate at greater scale than Ethereum.

“As things stand, I’d have to say I prefer Tron’s blockchain to Ethereum’s, due to its far greater transaction capacity,” he tells Cryptonews.com. “It can handle far more users and far more activity. But all of that is about to change when Ethereum 2.0 launches, with sharding and a new proof-of-stake model which should allow far more transactions.”

Guardian Circle CEO/co-founder Mark Jeffrey also agrees that Tron is slightly ahead of Ethereum technologically. Although, in his opinion, this is mostly a function of its development being more centralized around founder Justin Sun.

“They seem to be more or less equivalent to me,” he tells Cryptonews.com. “However, the technical infighting in the ETH community is a significant technical hurdle, especially for ETH’s famous scalability issues, and Tron has a strongman – Justin Sun – defining what is and what is not Tron cannon. In this respect, Tron is stronger technically.”

These observations are backed up by data. According to Coin Metrics, Tron has consistently handled more transactions than Ethereum (and Bitcoin) over the past year. 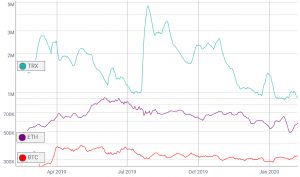 However, Ethereum’s Vitalik Buterin argued previously that the purpose of a consensus algorithm is to keep a blockchain safe, not to make it fast. According to him, when a blockchain project claims they can do 3,500 transactions per second due to a different algorithm, “what we really mean is ‘We are a centralized pile of trash because we only have seven nodes running the entire thing.’”

Moreover, in 2018, researchers accused Tron of plagiarizing its code from Ethereum, among other projects, which Justin Sun denies.

Ethereum is the more decentralized blockchain. As Glen Goodman explains, “Ethereum massively outguns Tron when it comes to node numbers, which suggests Ethereum is winning the decentralization battle.”

Goodman admits that both cryptocurrencies have witnessed a decline in node numbers over the past year, but Ethereum is still way ahead, with about eight times as many nodes.

He adds, “For both blockchains, there are worries over collusion between different nodes, as most are concentrated in the U.S., China and Europe. Collusion tends to happen more easily when nodes are close to each other geographically, but Ethereum is notable for increasing its node spread in recent months, particularly to Germany, Singapore and Japan.”

“Vitalik refuses to take up the strongman mantle, saying he is ‘one voice among many’,” he says. “While this sentiment is admirable, it is also less useful to making technical advances quickly.”

Lastly, there’s the question of community, both in terms of developers and the wider community of supporters. Here, Ethereum wins again.

“Ethereum recently launched its ‘One Million Developers” initiative’,” explains Glen Goodman. “They claim to already have at least 200,000 developers working in the Ethereum ecosystem and they’re aiming for the big million. Tron is thought to have far fewer developers but it’s got a huge number of active users, nearly a million, eclipsed only by – you guessed it – Ethereum, which has nearly one and a half million.”

That said, Mark Jeffrey argues that Tron has a much healthier economic and dapp (decentralized app) situation.

“There are basically only six ways to make money right now in the crypto space: gambling, exchanges, and DeFi (decentralized finance) – and then referrals to gambling sites, exchanges and DeFi. Tron has the healthiest gambling environment by far. This means secondary offerings like wallets can survive by providing referrals.”

Jeffrey adds that Tron itself has been very proactive in spending money on its ecosystem. “It will throw money into better wallets, more exchanges and better dapps quite aggressively. Ethereum has done none of these things.” (However, in May 2019, the Ethereum Foundation promised to spend USD 30 million on key projects across the ecosystem over the next year.)

It’s this kind of market strategy that leads Jeffrey to predict that Tron may ultimately triumph over Ethereum. “In the end, the platform with the healthiest raw economics will win. Tron is the clear leader in that department right now.”
This may be true, but predicting what crypto will look like in six months is tricky enough as it is, so predicting which fairly well-matched altcoin platform will ‘beat’ the other in the next few years is probably impossible. Still, competition is healthy, so let’s hope Tron and Ethereum continue to push each other in the near and distant future. And Bitcoiners will always find someone to troll.

@jchervinsky I’ve never been so icked out. I know shit is different when you meet up in person, Twitter differences… https://t.co/VGx5FTiS5g

____
Learn more:
Market Deaf to Tron’s Justin Sun Call to ‘Buy His Shitcoin’ as TRX Down 4%
Ethereum vs. EOS vs. Tron vs. Tezos – How do they Compare?

Swaps and NFTs Accelerate MetaMask's Growth
Bomb Demons, Force Shows, NFT Everything and 20 Crypto Jokes
BitPay vs BTCPay: Which Bitcoin Payment Processor is Right for Your Business?
Check out These Dozens of Crypto Christmas and New Year Gift Ideas
The US Election: Pullback Possible, But Neither Trump Nor Biden Won’t Stop Bitcoin
Data Leaks, Regulatory "Fun" and 20 Crypto Jokes
Cryptonews Rewind 2019: Q2 - The Big Rally, Libra & Regulatory Awakening
What Is Bitcoin Dust – and How Can You Clean it?
0 replies