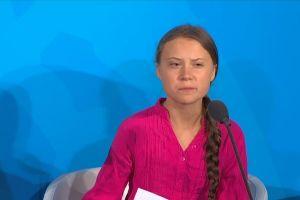 Sun was writing in the wake of the recent UN-led COP25 climate conference, which concluded recently in Madrid – leaving activists dismayed at the lack of progress made by global leaders.

As a young entrepreneur, I share @GretaThunberg’s passion to change the world. Crypto will contribute immensely on… https://t.co/cCHogGWuIq

However, he did not specify any further.

Cryptocurrency has found itself at the center of climate change activist scorn in recent months, with many pointing out how energy-consuming activities such as mining can be.

But Sun suggested that decentralized settlement solutions would help with efforts to “reduce carbon footprints.”

It seems that the mention of Thunberg’s name has divided the crypto-community, however.

I don’t think that spoilt brat @GretaThunberg will approve of #bitcoin mining or anything related to cryptos.

Many of Sun’s supporters have expressed their displeasure.

Justin, don’t be ridiculous. Gretta is a great pathos. You don’t need to mention Greta in your aspirations. Your business is much more serious, and Gretta doesn’t deserve a mention in the crypto world.

However, the Tron chief’s move was welcomed by others.

Mad respect. On the mission to save the world! 🌎 @justinsuntron you have a bright future ahead of you!

Others took a broader swipe at the crypto-community in general, slating the anti-Greta sentiment and showing it evinced crypto users’ underlying “toxic masculinity.”

completely disgusted by some of the comments here but sadly not surprised. Crypto is the best place I know to see #toxicmasculinity in action

A number of internet users chided Sun for starting his refrain with the expression “as a young entrepreneur.” Sun is believed to be around 30.

Others dismissed the move as a “PR stunt.”

Readers will recall that Sun famously postponed a much-vaunted lunch meeting with crypto-skeptical billionaire Warren Buffett – an event he had paid USD 4.56 million to charity for. In the run-in to the meeting-that-never-happened, Sun had bombarded Twitter with announcements, as he claimed crypto CEO after crypto CEO would be joining.

The Tron boss then caused yet more confusion when he posted – and then deleted – what appeared to be a groveling apology for his actions in the lead-up to the Buffett meeting, which, Sun said, to be rescheduled.

In the meantime, Justin Sun might consider inviting Greta Thunberg for a lunch.