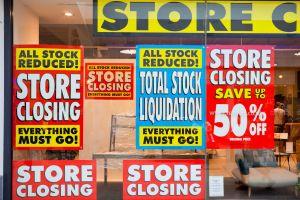 Bricks and mortar shops began to struggle as soon as ecommerce started to gain traction. Today, online shopping has become the norm for many consumers. It is estimated that globally, over 1.9 billion people have made online purchases in 2019. Conversely, thousands of physical stores are experiencing a drop in sales, which has led to store closures and even bankruptcies. Analysts have coined this phenomenon the “retail apocalypse.”

In this article, we will discuss this trend and the potential role that digital currencies could play in a predominantly digital retail market.

What is the “retail apocalypse”?

The “retail apocalypse” refers to the close of physical stores in the U.S. (especially of larger chains) as a result of changing consumer behavior and the rise of ecommerce.

The term “retail apocalypse” first appeared in 2017 following the closure of a large number of bricks and mortar stores by major retailers as well as several high-profile retail bankruptcies.

Analysts at the investment bank UBS predict that an estimated 75,000 shops that sell consumer electronics, furniture, and clothing will close their doors by 2026. At that point, ecommerce is expected to make up around 25% of retail sales.

In the list of major retailers that have closed hundreds of physical stores reads like the who’s who of American retail. Radio Shack (1,470 store closures), Toys R Us (735 store closures), and GNC (700 store closures) are examples of retailers who have suffered as a result of the “retail apocalypse.” Since 2017, over 15,000 bricks and mortar shops have been closed, according to UBS.

As the world goes digital, it is hard to envision a future where online shopping does not make up a majority of retail sales. Nationwide same-day drone delivery (and probably also returns) are estimated to become the norm while consumers are spending more time in front of screens than ever.

The question for cryptocurrency advocates, users, and investors is whether decentralized digital currencies could end up as one of the major beneficiaries of the retail apocalypse or not.

Despite the many benefits that cryptocurrency has as an online payment system, bitcoin (BTC) has not managed to successfully penetrate the online retail market in the first decade of its existence. While there are several online retailers that accept bitcoin, the list is much shorter than the list of retailers who accept PayPal, for example.

The reasons why bitcoin has not (yet) managed to succeed as a transactional currency for online payments is partly due to its volatility but mainly because of bitcoin users’ strong propensity to “HODL,” or reluctance to spend cryptocurrency hoping it will rise in value. The lack of major retailers that accept the digital currency is, of course, another factor why mainstream adoption as a payment method is still years away.

However, the retail apocalypse may change that.

“It sure will. Crypto is an excellent use-case for online payments specifically,” Yousef Abdulhassan, founder and CEO of the crypto-powered ecommerce platform CoinMall, told Cryptonews.com.

Meanwhile, Dylan Bathurst, founder of the Lightning Network-powered get-paid-for-your-data app Trakkin.me, says he does not believe in the retail apocalypse.

“I think it’s just kind of a generational shift to online, but then people will want an in-person experience and move back to offline. But I do think online shopping will eventually dominate. Bitcoin indirectly benefits from that being that there are just more online payments happening, there will be more bitcoin payments happening,” Bathurst told Cryptonews.com, adding that bitcoin itself is still in a store of value stage now and will be for a while.

However, according to him, as Lightning Network develops, we’re seeing new and interesting use cases for bitcoin and “I think the future is bright there.”

Perhaps the bigger question than whether crypto will benefit from the “retail apocalypse” or not is whether it will be “real” cryptocurrencies such as bitcoin or fiat-currency pegged stablecoins that will win the race to become the go-to online spending digital currency.

While bitcoin (and altcoin) users are faced with price volatility and a reluctance by retailers to accept crypto as a payment method, fiat currency-backed stablecoins may end up leading the pack of digital spending currencies as businesses are already comfortable with accepting fiat currency in digital form.

“The most liquid and most widely adopted coin will win, which currently is bitcoin. I don’t think that’ll change any time soon either, since buyers don’t want to go through the hassle of exchanging their BTC to whichever other coin just to make a payment,” he said.

Meanwhile, according to Bathurst, stablecoins still have a lot of the same challenges bitcoin has in terms of user onboarding (get a wallet, sign transactions, etc).

“So, I really don’t see them as helping ecommerce but, instead, as a way of helping people with large crypto holdings to hedge market volatility,” he said.

It is difficult to predict to what extent more shoppers moving online will impact cryptocurrency adoption and usage. While online shopping provides an excellent use case for digital currencies, they are yet to reach critical mass as an online payment method.

Having said that, bitcoin has gone a long way in just one decade. So, it wouldn’t be too much of a surprise if it eventually ends up as one of the go-to digital payment options.
__

Learn more: Now That Bitcoin ‘is Digital Gold,’ Which Crypto is For Payments?

Attempts to Increase Bitcoin's Supply Would End Up With Another "Bitcoin"
First ETHs, High BTCs, Pushed USDCs and 20 Crypto Jokes
Learn These 5 Key Crypto Terms – and Start Trading Like a Pro
Tezos, ConsenSys, Blockstack, and Others Share Their COVID-19 Stories
Swaps and NFTs Accelerate MetaMask's Growth
From ATHs Over Bans to 20 Crypto Jokes
Bitcoin Snowball Is Expected To Hit More Institutions in 2021
Here’s Why Decentralized Exchanges Are Growing So Fast Right Now
0 replies