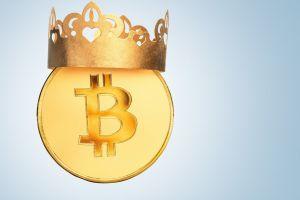 Bitcoin (BTC)’s monetary fairness may lead to the 2020s becoming the decade of hyperbitcoinization, which is a theorized form of Bitcoin-induced currency demonetization, according to Lucas Nuzzi, Head of Network Data at US-based crypto data provider Coin Metrics.

“Everything that we’ve experienced up until this point has solidified the value proposition of Bitcoin,” he said during Messari’s Mainnet online conference earlier this week.

Nuzzi explained that Bitcoins’ fair distribution and turbulent history have created this “truly decentralized and stateless monetary base.”

“And stateless beyond just nation states. [There’s] not a foundation, not a development arm, not a development company [behind Bitcoin]. It’s a truly stateless monetary base that strengthens the case for BTC as a store of value, which now can be supported by data and really solidify this idea that Bitcoin is the antithesis of interventionism and the type of money that we will need heading into the 2020s,” he stressed.

In the opening portion of his talk, Nuzzi covered the paradox that has appeared when it comes to the US dollar.

“The response by central banks to the Coronavirus pandemic has created a lot of money paradoxes,” said Nuzzi.

“On the one hand, there is widespread concern about central bank interventionism and markets not really reflecting reality whatsoever. On the other hand, there is increased demand for US dollars.”

Change in holdings since the start of each program 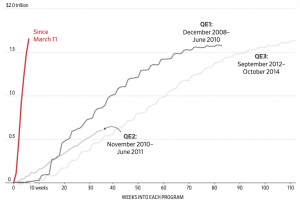 As indicated in the above chart, which was included as part of Nuzzi’s presentation, the current quantitative easing program has been much more aggressive than previous iterations. According to Nuzzi, there are estimates that the Federal Reserve’s balance sheet could grow as high as USD 11 trillion by the end of the year.

Fed balance sheet has ballooned to $7.165 trillion, an increase of another $67.9B over last week, which, btw, is still on a $3.5 trillion annualized pace on its own.
The Fed has increased its balance sheet by 90% since last August.
They are nuts & reckless. pic.twitter.com/GhpK7xhf6N

Despite this tremendous increase in activity by the Federal Reserve, the DXY (Dollar Index Spot) is up roughly 0.9% year-to-date. Additionally, there has been tremendous growth in USD-denominated stablecoins this year, with the total value of these stablecoins roughly doubling over the past few months.

Notably, Bitcoin was celebrating its third halving, in which the amount of new BTC created on a regular basis is cut in half, as central banks around the world ramped up their money printers.

Advantages of BTC over gold

According to Nuzzi, the recent crisis should have been viewed as a potential perfect storm for gold.

“Gold bugs initially felt vindicated because gold was appreciating relative to the global markets in the early stages of the pandemic, but gold itself [was affected] by the global supply chain issues that the pandemic introduced,” said Nuzzi.

As reported, in March, millions of ounces of gold could not be delivered due to supply chain issues.

“People who thought they owned gold realized that they’re at the mercy of these third parties that are subject to other issues that you face in a pandemic, and meanwhile, Bitcoin was operating business as usual,” noted Nuzzi.

To Nuzzi’s point, the Bitcoin network settled USD 50 billion worth of money transfers in April.

“In an era of pandemics and social unrest, it’s pretty clear that a reliable store of value needs to be portable and digital,” added Nuzzi.

The Coin Metrics network data analyst also pointed out that, as Bitcoin’s issuance rate is on the decline thanks to the halving, the supply of gold is expanding due to increased production in China, Russia, and Australia.

“In fact, this year will be the first year where Bitcoin supply inflation is lower than gold,” said Nuzzi.

Bitcoin is a highly dispersed asset

Nuzzi also covered the importance of the decentralization of Bitcoin holders during his talk. Notably, Coin Metrics co-founder Nic Carter pointed to the dispersion of coins on a cryptocurrency network as a key point of comparison between crypto assets during his own appearance on a panel at Mainnet.

“What makes Bitcoin unique as a fair monetary system is that, as the first successful crypto asset, there are basically no guarantees or precedents that signaled it was going to succeed,” said Nuzzi.

From Nuzzi’s perspective, Bitcoin’s turbulent history, including everything from the shutdown of the Silk Road black market to the block size wars, has been tremendously helpful in increasing asset turnover.

“These early adopters that went through those first booms and busts of both activity and in the market [price] sold coins to newcomers because there were no guarantees of success and there was plenty of FUD [fear, uncertainty, and doubt], and these newcomers then became early adopters and that cycle has undoubtedly democratized the Bitcoin monetary base,” said Nuzzi.

In an effort to illustrate this point more clearly, Nuzzi compared the dispersion of coins in Bitcoin to the relatively higher-level of centralization of holdings found in altcoins. 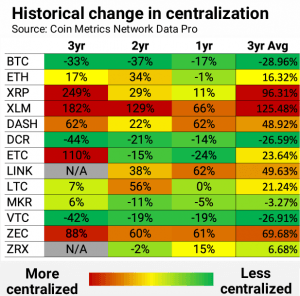 The above chart shows the year-on-year change in the number of addresses on each cryptoasset network that hold more than 1% of the total monetary base.

“Here, you can see, relative to three years ago, the number of addresses that hold more than 1% of Bitcoin’s supply has gone down by 33%, and over the years, Bitcoin has consistently decentralized its monetary base,” explained Nuzzi. “Whereas assets like Ripple, Stellar, and even Zcash have consistently become more centralized over the years.”
____

Learn more:
How Close Are We to Hyperbitcoinization – Total Bitcoin Dominance?
Bitcoin’s Unit of Account Status is Still a Fantasy – BitMEX Research
Imagine Separation of Money and State: 6 Crypto Experts Weigh In

As US Seized Gold in 1933, Is There a Threat to Bitcoin in the 2020s?
Conflicts, Interests, Emojis and 20 Crypto Jokes
COVID-19 Crisis Weighs On Crypto M&A, Startups To Sweat Harder
Has Zimbabwe Made U-turn on Bitcoin? Cryptopreneurs Still Skeptical
Happy Halving, Indecisive 9K and 20 Crypto Jokes
DeFi Unlocked: How to Earn Crypto Investment Income on Uniswap
Imagine Regulators Shutting Tether Down - What Happens to Bitcoin?
DeFi on Binance Smart Chain: What’s Already Yielding?
0 replies

Crypto Derivatives Blossomed In May, Celsius Hit USD 1B + More News Bitcoin Investors are Getting Greedy Again, and It’s a Bad Thing for BTC
Scroll to top