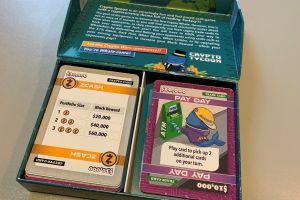 Over ten years since its birth, and cryptocurrency still hasn’t gone mainstream. Still, Houston-based gaming startup Cypherpunk might change all this, with the release of Crypto Tycoon.

Billed as the world’s first cryptocurrency-themed card game, it hopes to prove a hit among diehards and crypto newcomers alike when it’s released in March.

Designed for two to five people, it sets players the task of becoming the first to complete portfolios for three separate cryptocurrencies. This might seem daunting to the uninitiated, but the game is refreshingly easy to get to grips with and surprisingly addictive. So if Monopoly has helped to normalize the idea of monopolistic capitalism, then Crypto Tycoon may very well help to turn more people on to the idea of decentralized digital money.

Already being championed by the likes of Peter McCormack, a popular Bitcoin podcaster, Crypto Tycoon is easy to pick up but difficult to master. In theory, completing a portfolio of three different “Crypto Cards” is straightforward, but in practice, your opponents can use “Trade Cards” to attack you.

It’s this element that makes a tactical approach to the game essential. Deciding when to lay a Crypto or Cash Card becomes an issue of considerable delicacy, especially when an opponent could play a “Hacked” Trade Card that lets them steal one of your completed portfolios.

“Crypto Tycoon was designed to primarily be a really fun, fast-paced, exciting and addictive game that anyone can play, whether you are into Crypto or just into playing games.” Cypherpunk’s Barry Aldeen told Cryptonews.com. “It was designed to make everyone feel like they are right on the cusp of winning, but that it can be ripped away at any moment by another player, or that you can rip it away from another player at any moment and claim your victory.”

Games of Crypto Tycoon can last for anything from half an hour to an hour and a half, depending on the luck of the draw. And while it will initially appeal to those who already dabble in crypto, it has considerable cross-over potential in its own right.

It will, therefore, be interesting to see how it fares once it’s released in March.

Is Algorand Destined for Cryptocurrency Stardom After 130% YTD Surge? Bitcoin’s Flash Crash was a “Healthy Pullback” That Could Catalyze Major...
Scroll to top